...Ex Watford striker opens up on 'crazy' transfer and details plans after arriving in UK

Odion Ighalo described his move to Man Utd as a “dream come true” after touching down in the UK. 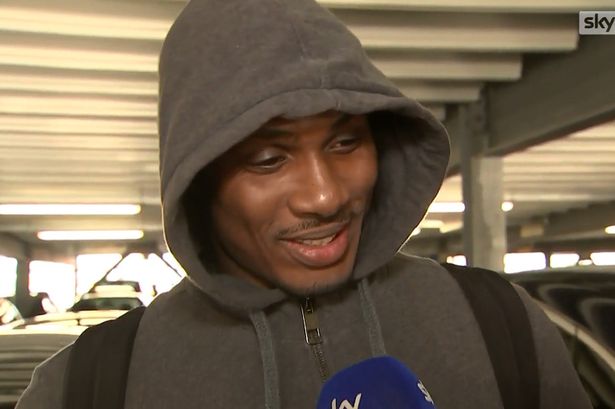 The former Watford striker flew into Manchester Airport on Sunday as he joins United on loan until the end of the season.

Ole Gunnar Solskjaer’s desperate search for a frontman led him to Ighalo, who had been plying his trade in the Chinese Super League with Shanghai Shenhua.

He is now preparing for his first training session with his boyhood club, and admitted he was raring to go.

“It’s been crazy you know,” Ighalo told Sky Sports News. “I’m happy to be in Manchester first and this is a great opportunity
“I’m grateful to God and to my agent and to the coach who’s given me the opportunity to be here, to walk out with the team and finish very well this season.y for me.

“I’m grateful to God and to my agent and to the coach who’s given me the opportunity to be here, to walk out with the team and finish very well this season.

“It’s a dream come true because since I was a kid, I’ve always dreamed about Man Utd. But this is reality now, so I can’t say much until I get started.”

He added: “I am happy to be here and to work out with the team and finish very well this season.

“The plan is to just chill today because I travelled a very long way from Shanghai to Manchester.

“Today is to just rest and tomorrow we start to work.”

Ighalo missed United’s draw with Wolves on Saturday, due to his loan move only being confirmed late on deadline day.

But despite the start of the winter break, the 30-year-old will be reporting for training duty on Monday.

Boss Solskjaer said after the Wolves match: “We will give him time to settle. He is a striker, has a physical presence and is a goalscorer so he will give us a lot.

“Being the top scorer in the African Cup of Nations tells you a lot about the qualities we are going to get.”

The Nigerian also boasts a decent goalscoring record in China, having netted 10 times in 15 starts this season.

His previous spell in England was similarly prolific, averaging a goal every two games during his two-and-a-half year stint at Vicarage Road.

He names Man Utd legends Andy Cole and Dwight Yorke among his idols growing up, and Solskjaer is hoping Ighalo will provide his side with a different option in attack.

“It also gives us a chance to rest Mason Greenwood and to rest Anthony Martial at times with so many games coming up.”

United now have a fortnights break to allow Ighalo to get accustomed to life in Manchester, before they return to league action against Chelsea on February 17.

Read  Also:Fernandes, Ighalo not among the highest paid Man Utd players
They then head to Club Brugge n their Europa League last-32 tie, before Ighalo could be set for a return to his old club Watford on February 23.

Former Man Utd defender Rio Ferdinand told his YouTube channel: “I just hope, I really want him to do well, to come in and help the guys.