Nigeria international, Alex Iwobi continued his good form for Arsenal who returned to winning ways with a hard fought 4-1 win in their New Year’s Day clash against Fulham at the Emirates Stadium. 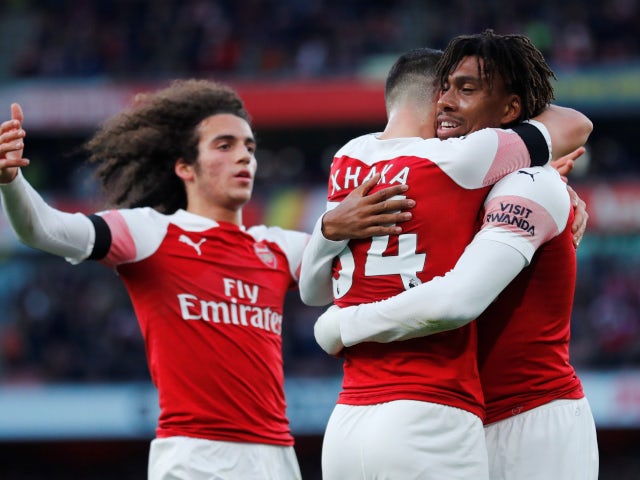 Iwobi was the Gunners best player in the first half and created the assist that led to the side’s operening goal scored by Granit Xhaka.

He was very lively and continued to find space to make things happen for the Unai Emery side whose victory today lifted them to within two points of fourth placed Chelsea.

A second goal followed early in the second period through Alexandre Lacazette, but Fulham dragged themselves back into the game thanks to substitute Aboubakar Kamara’s close-range finish.

That second miss in particular would prove to be costly, as Arsenal edged in front less than two minutes later through a clinical finish – Xhaka ghosting in front of Tim Ream and guiding Alex Iwobi’s cross past Sergio Rico with a stabbed finish.

Arsenal looked a lot brighter from that point on, with Rico keeping out Lacazette and opening goalscorer Xhaka, while Aubameyang – who had earlier shot wide inside the first two minutes – guided a header the wrong side of the post shortly before half time.

Arsenal’s nerves were settled by Ramsey, though, with the Welshman – whose arrival in place of Lacazette was greeted by audible jeers around the Emirates Stadium – firing home a killer third.

Read Also: Iwobi had a good game against Liverpool–Emery

Aubameyang added some gloss to the scoreline late on with his 24th goal in 34 league outings for Arsenal, driving the ball over Rico via a deflection after the division’s worst defensive side failed to clear their lines from a corner.

Nigeria, 53 others listed for 2019 African Games in Morocco