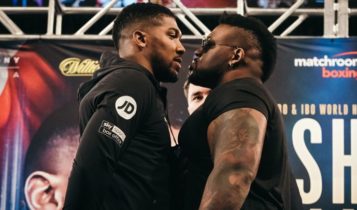 Less than four months before fighting Anthony Joshua at Madison Square Garden, Jarrell “Big Baby” Miller got nasty with his opponent in a pre-fight press conference, escalating a conflict that’s been simmering since last year.

This time, though, Joshua responded to the taunts.

“Jarrell Miller is a little b-. I am going to throw this jab down his throat,” Joshua said. “For a guy that is 300 pounds, he punches like a fairy. June 1, this is going to be a show.

“Come out and watch this one New York. I am not up here playing the gangster role. I really knock people out, look at his little hands. This is the first time he will sell out a show and it’s because of me.

“Of course he spends all day thinking about me and watching my fights, he has to – but it still won’t be good enough.”

With a win, Joshua would exit his fight against Miller with the IBO, WBA, IBF and WBO heavyweight straps in his possession. Miller, meanwhile, would like to notch his 21st career knockout against Joshua.