Joshua: I Learn from Taylor 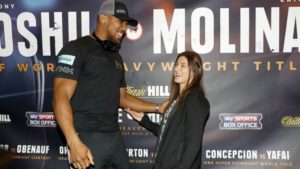 Ireland’s unified world lightweight champion can add a third world belt when she battles Volante on Friday in Philadelphia.

“When I watch her, I learn from her as well,” Joshua told Sky Sports. “Even as a champion, I watch her and think I need to do something like that. She has her skills and technique down to a tee.

“I think for Katie and anyone who is fighting, it’s just important to be yourself. She’s definitely going to become undisputed champ.

“She’s very calming, which is working for her, she’s a beast in the ring, and just keep on doing what you’re doing.

“Some people talk a good game on the outside, but they don’t fight like it on the inside.”

Joshua and Taylor had already excelled in the amateur ranks, winning gold at the London 2012 Games, and Britain’s biggest boxing star insists they could not maintain such success without maintaining their commitment to boxing.

“Without loving the game, you’re never going to acquire the fame,” said Joshua.

“She’s done everything from the Olympics, fought in Ireland, fought in the UK, fought in the States, so naturally her dedication to the sport is taking her around the world anyway, and getting her the fame and recognition that you do need in the sport.

“Don’t make that your priority and the principle of why you do what you do, because fame and being popular does not win fights.”

Ighalo: My goals have started coming