Roma owner James Pallotta who partied all night following the club’s triumph over Barcelona on Tuesday, has placed  €230,000 about (N103million) on the table to fix a fountain he dived into shortly after the final whistle in celebration of what turned out to the biggest surprise of the night.

Pallotta went for a dip in the Rome’s Pizza del popolo fountain on the spur of the moment.  Although there was no reported serious damage to the fountain, an elated Pallotta nonetheless decided to dole out the money to renovate the fountain in what could pass for an indelible way of recording the day Barcelona came saw and crashed

The Roma President was overcome with joy as his club beat Barcelona 3-0 to progress to the Champions League semi-finals on away goals following a 4-4 aggregate draw.

The 60-year-old American businessman jumped into one of the city’s fountains as he celebrated long into the night with fans.

On Wednesday, Pallotta discussed plans for a new stadium with Rome’s mayor Virginia Raggi, before taking the unusual step of donating a large sum to renovate the fountain.

“I want to thank the mayor for my well-deserved fountain fine of €450,” Pallotta joked.

“I got caught up in the excitement; it was a great night for all of us in Rome. But I also don’t want to encourage other people to jump into fountains, except if they want to fix one.

“So I’ve decided that I think it would be a great personal gesture to fix the fountain in front of the pantheon, and so I’m going to donate €230,000 to it.

“As I said, trying not to encourage people… love this city, and if you do want to jump in then fix the fountain.”

This is only the second time that Roma have reached the semi-finals of the Champions League. Ahead of the highly anticipated draw on Friday, Pallotta says he doesn’t mind who Roma draw next, and that fans should simply enjoy the journey. 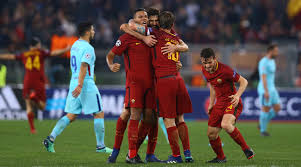 He added: “I really don’t care who we play. I think we can play against anybody, certainly with what we showed yesterday.

“So we’ll draw who we draw on Friday. I’m just looking forward to a couple more games, and I hope everyone in Rome is too. It’s a nice little ride.”

Iwobi to get Police protection in Moscow