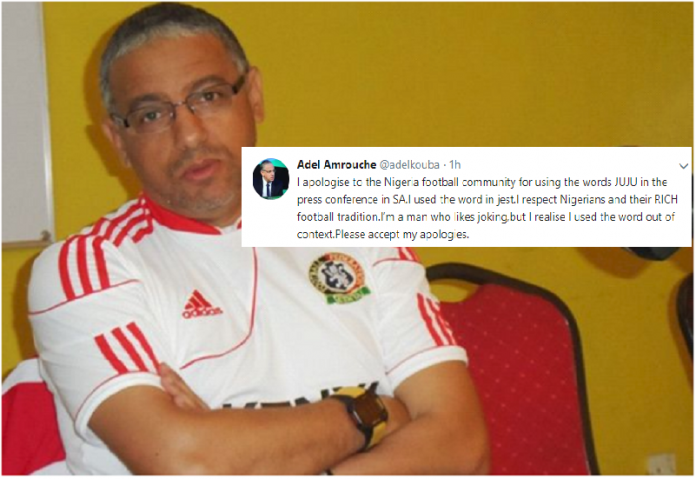 Though Liberia’s Head Coach, Adel Amrouche may have been compelled to apologise after making derogatory ‘Juju’ remark about the Super Eagles of Nigeria but that may however not be the last of the matter.

The Confederation of Africa Football(CAF) and by extension, in the Fédération Internationale de Football Association (FIFA) are in the know already and have taking up the matter and not with a pitch of salt.

It may go beyond giving a slap in the wrist as an ember of heavy sanction is looming from the football governing bodies for the national team coach.

Source in the know had hinted that NFF President Amaju Melvin Pinnick, who is also 1st Vice President of CAF, actually reached out to the Libyan FA President to ensure Amrouche apologized concerning his distasteful comment about the Nigerian senior national team which led to the apology tweet the coach shared on Sunday.

“The NFF sees the Libyan coach’s comment as unprofessional, disappointing and capable of fanning embers of discord. And had referred to the FIFA Ethics Committee.”

It will be recalled that Amrouche had accused the Super Eagles of using ‘juju’ to play football opining that he wasn’t bothered about playing them home or away.