Juventus midfielder, Adrien Rabiot, has put Manchester  United and Everton on alert after the latest report stated the Frenchman is ‘open’ to a Premier League move. 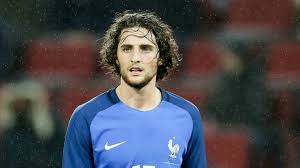 Despite his undoubted talents, the France international struggled to adapt to the Italian game and has been marginalised to the tune of just 14 starts across all competitions in his debut season in Turin.

Man Utd recently registered their interest in the player, with the club reportedly hoping his potential acquisition would allow him to replace an ageing Jose Mourinho signing still with the team.

Now, British newspaper the Metro (who cite Italian publication Corriere di Torino) have added fuel to the fire by stating ‘Rabiot would be open’ to a Premier League switch.

The Red Devils, as well as Carlo Ancelotti’s Everton, are both name-checked as potential suitors, while Rabiot’s agent and mother, Veronique, is revealed to be ‘sounding out potential options.’

While Ancelotti is noted to rd appears the likelier scenario, with Juventus’ long-standing interest in Utd talisman Paul Pogba a possible bargaining chip.

Ole Gunnar Solskjaer recently revealed be the driving force behind the Toffees’ approach, a move to Old Trafford thoughts about a potential Pogba-Bruno Fernandes creative axis, yet rumours of a Pogba exit continue to persist in the media.

The Metro article notes that Rabiot – valued at around the £26.5m mark – could feasibly be used as a makeweight in any deal to take Pogba back to the Bianconeri.

The sticking point of Rabiot’s £120,000-per-week salary is duly noted in the article, though this would be entirely offset plus interest if Pogba were to move the other way.

Meanwhile, Man Utd have joined Chelsea in their efforts to pinch a free agent signing away from Jose Mourinho and Tottenham’s grasp.

Ronaldo: I had no problem with Juventus players