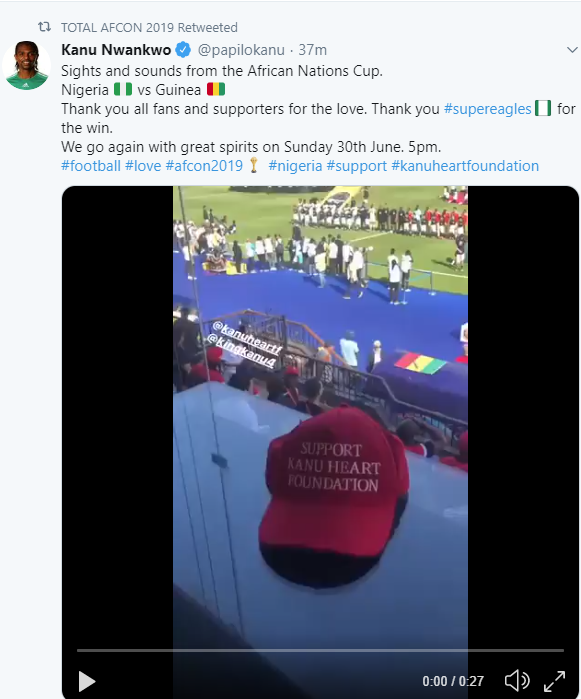 Soccer fans has showed solidarity to Kanu Heart Foundation. This came as Former Super Eagles captain, Kanu Nwankwo, celebrated Nigeria’s qualification for round of 16 on Wednesday with the AFCON fans at Alexander stadium.

With dance and jubilation the fans joined the former African footballer and Founder of the Kanu Heart Foundation who went to the fans stand basking in the euphoria of the Eagles 1-0 victory against the Syli of Guinea to celebrate.

Kanu who is one of the African football legends appointed by Confederation of African Football for the ongoing tournament in Egypt stormed the stadium in all fitted blue suit on a pant trouser with a conspicuous red cap with an inscription: Support Kanu Heart Foundation to fit.

The message on the cap was heartwarming to the hundreds of fans at the stadium and their expression was beaming with smile and good work for Papillo who watched the match live and had course to celebrate the eagles’, even as the fans were shouting “Papillo!, Papillo!!, Papillo!!! in chorus.

And basking in the midst of the continent’s football fiesta, Papillo’s memoir came to live and the heart foundation remarkable project, this was evident as international journalists were bargaining for attention with their media crew as Kanu was all over with the fans.

Nigeria became the first country to qualify for the Round of 16 following victory over the Syli Stars, thanks to Kenneth Omeruo’s header in the second half.

Although Kanu was happy with the country’s qualification, he feels the margin should have been bigger if Ighalo was not selfish.

“We are more relaxed now after the win over Guinea to advance to the next round.

“We had few chances to score more goals in the first half when Odion Ighalo had a good chance to pass the ball to Musa but he did not do so.

“Guinea are no pushovers, but we took our chances,” the two-time Africa Player of The Year told CAFOnline.

Kanu also refused to predict who will lift the AFCON title, adding that it’s still early days in the tournament.

“I don’t want to predict who will win the tournament now after two games but after the group games then we can see the real teams in contention,” he added.

read also;Kanu Gets Appointment for AFCON, Six Others

Tournament to discover next Messi, Ronaldo begins in Lagos