Bett just back from 2018 African Athletics Championship dubbed Asaba 2018 where he unfortunately failed to make it to the podium died near Nandi County in his home country on Wednesday morning. 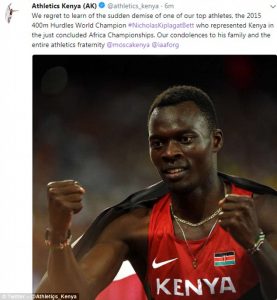 Local police commander Patrick Wambani reported the vehicle had struck a bump and veered off the road before landing in a ditch near Lessos, Nandi County.

The hurdler had become the first Kenyan ever to win a short-distance (under 800m) race on the world stage when he claimed gold in the 400m hurdles at Beijing 2015.

Bett made his breakthrough at the 2011 Kenyan Athletics Championships and his strong form saw him selected for the 2014 Commonwealth Games, where he missed out narrowly on the 400m hurdles final.

Undoubtedly the crowning glory of Bett’s career was at the World Athletics Championships in Beijing where he upset the odds to finish with a gold medal.

Bett had scraped through to the 400m hurdles final, finishing in the last qualification spot by five hundreths of a second.

But despite starting in lane nine, Bett finished first with a time of 48.37secs ahead of Russia’s Denis Kudryavtsev in second. 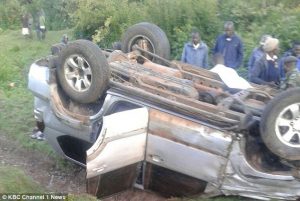 Bett also appeared at the 2016 Rio Olympics as the reigning world champion but suffered disappointment as he crashed out in the first round.

Kenyan sports minister Rashid Echesa joined the association in paying tribute to Bett, writing: ‘On behalf of the sporting fraternity and my ministry of sport, I convey my sincerest condolences to his family. Rest in peace.’

The International Associations of Athletics Federations also tweeted their condolences saying that they were ‘deeply saddened’ by Bett’s passing.

Kovacic to have Chelsea medical