By Our Reporter On Sep 28, 2021 0
Ronald Koeman is on thin ice ahead of Barcelona's Champions League game away at Benfica on Wednesday.

Ronald Koeman’s future as Barcelona coach may already be decided but the outcome of the next two games, starting with Benfica in the Champions League on Wednesday, could buy him some extra time.

Three matches without a win and a press conference in which Koeman cancelled questions and demanded support felt more like the final week of a tenure about to be brought to an end.

A goalless draw away at Cadiz ended with Gerard Pique playing up front and while Pique called for calm after the game, the club captain also shied away from backing his coach.

“The club has been on the crest of a wave for many years and we are not used to this,” Pique said. “We all need to make an effort to give stability. We can complain or pull in the right direction. Let’s not look for friction because this doesn’t help anyone.”

After drawing with Granada, Koeman seemed both to dismiss Barcelona’s possession mantra and denigrate his players in one breath. “If you look at our squad, what are you supposed to do? Play tiki-taki?” Koeman said, in a reference to tiki-taka, the name attributed to the style played under Pep Guardiola.

But a 3-0 victory over Levante on Sunday has, at least briefly, lifted the mood ahead of a week that is likely to be taken as a litmus test for whether Koeman returns from the international break still in charge.

After facing Benfica, with the pressure on in Group E after the opening defeat by Bayern Munich, Barcelona play on Saturday away at Atletico Madrid, La Liga’s reigning champions, who are enduring a rocky start themselves.

A loss in either game, even at this early stage, would represent a damaging blow to Barca’s hopes in either competition and perhaps convince the board the need for change is now.

Yet a better combination of results could also earn Koeman some breathing space, even if it appears clear the Dutchman is not the long-term choice of club president Joan Laporta.

A period of stability would suit Laporta, given he needs time not only to identify a successor but also persuade them to join a club still working off more than a billion euros of debt and too broke to make significant signings for at least another year.

And while the two-week international break might seem the preferable moment to make a change, a new coach would then be plunged into three games against Valencia, Dynamo Kiev and Real Madrid, meaning a potentially turbulent start.

The better scenario both for Koeman and the board would be that the team recovers, in a similar way to last season when an uncertain first few weeks gave way to a gradual gathering of momentum.

There were certainly reasons for optimism against Levante, who rolled over for the kind of morale-boosting victory ideally suited for the start of a testing week.

The biggest cause for enthusiasm was the return of Ansu Fati, the inheritor of Lionel Messi’s number 10 shirt, who raised the roof by coming on after 10 months out through injury and then sent the fans ballistic by scoring in the 91st minute.

Ansu’s return could be transformative, not only because of what the 18-year-old brings to Barcelona’s attack but for what he represents, now more than ever: a La Masia graduate and one of the club’s last remaining claims to belonging with Europe’s elite.

Even before Ansu’s introduction, the crowd were admiring the performances of the 19-year-old Nico Gonzalez and the 17-year-old Gavi in midfield. Luuk de Jong and Memphis Depay scored the opening goals to suggest the summer transfer window was not entirely a backward step. 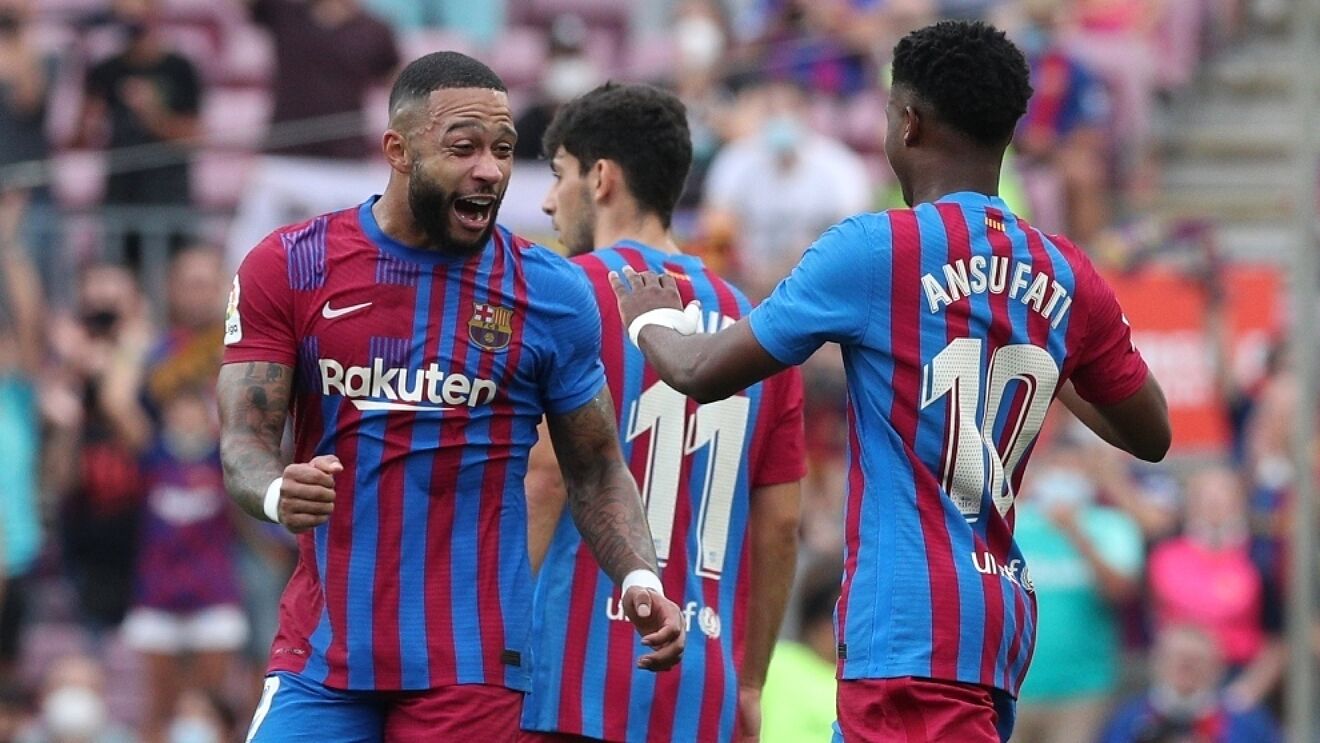 Barca also scored early, which allowed the players to operate more freely and avoid the unpalatable tactics witnessed in recent weeks when the team has been searching for a goal.

Levante, though, were generous opponents and Koeman cannot expect the same from Benfica, who are unbeaten, having won 10 of their 12 games so far this season, with the scrap to join Bayern in the last 16 – which also includes Kiev – far from clear-cut.

“We are Barcelona, we are going for La Liga and the Champions League and all the competitions we are in,” said Fati on Sunday. “All the teams want to win everything but we are Barca, we have to fight.”