LaLiga has said Barcelona, Real Madrid and Athletic Bilbao want to prevent the growth of other Spanish clubs after they challenged the league’s agreement with CVC Capital Partners.

The Spanish league agreed to sell 10% of its business to the investment fund CVC in August. The deal was unanimously approved by LaLiga’s executive committee, with 38 of the 42 teams in the top two divisions later ratifying the agreement.

Barca, Madrid and Athletic, along with second division side Real Oviedo were the four clubs that voted against it, which saw CVC’s outlay drop from €2.7 billion to €2.1bn. The money will now be shared by the other 38 clubs — and now Oviedo, too, after they later come out in support of the deal. The three clubs who rejected the deal were allowed to opt-out.

“It is surprising they are challenging something that does not actually affect them,” a league spokesman told ESPN. “They would only benefit from the growth of LaLiga in the coming years.

“LaLiga now has the support for the agreement from 39 of the 42 clubs that make up the league. We will continue working with CVC on this project, which we are confident is good for LaLiga and the clubs.

“The challenge announced [on Friday] demonstrates that these three clubs are attempting to prevent growth for the other clubs in the league.

“Madrid nearly always challenges LaLiga’s efforts to grow the league and has a history of challenging the league in court. We as LaLiga will always and continue to defend the interests of the majority of clubs.”

Barca, Madrid and Athletic had earlier released a joint statement confirming they would fight the CVC deal.

It said: “FC Barcelona, Athletic Club and Real Madrid CF announce that they have challenged the agreement adopted by the LaLiga Assembly on Aug. 12, relating to the operation between La Liga and CVC, as it is an agreement that infringes the applicable rules set out (and in particular, amongst others, the Royal Decree Law 5/2015), and it was adopted as part of a highly irregular and disrespectful process toward with the minimum guarantees required to those purposes, especially faced with an operation of such importance and longevity.”

The money raised from the sale will be distributed among the clubs in the form of a loan, repayable over a significant number of years. The payments are based on the contributions the clubs have had since the centralisation of audiovisual rights in 2015.

The clubs must spend at least 70% of the money on investments related to long-term growth and 15% on refinancing their debt, while 15% can be used to increase their league-imposed spending limits.

CVC, meanwhile, are due 10% of the league’s revenue for the next 50 years, including money raised from television rights. However, they will now not be entitled to any of Barca, Madrid or Athletic’s earnings. 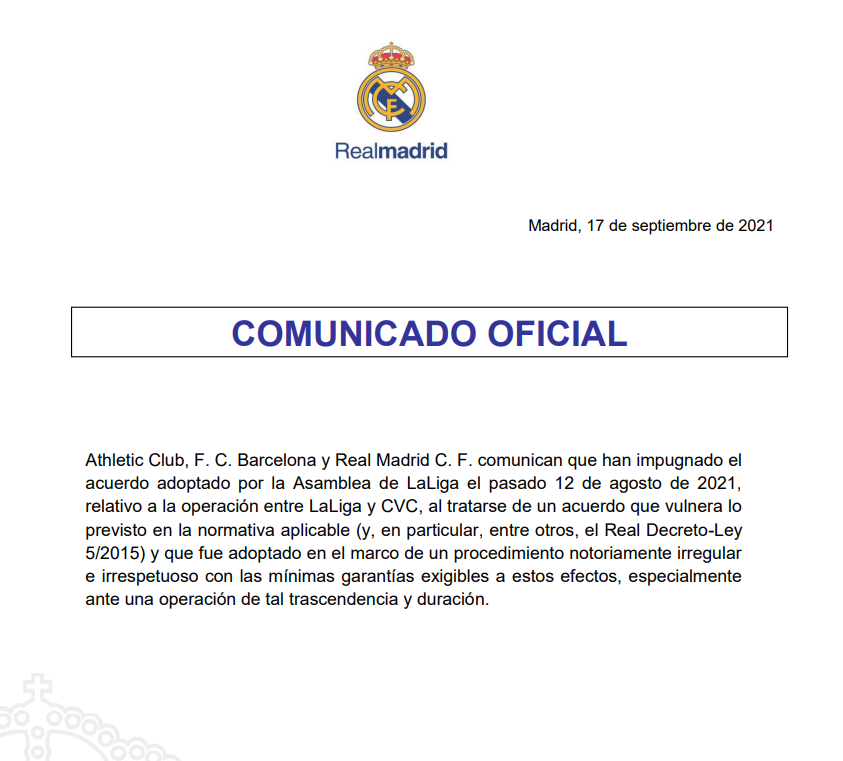 Read Also: EPL: Solskjaer wanted to keep Lingard at United, says Moyes
Barca president Joan Laporta has criticised the deal, saying it would have cost the club more in the long term than they would have made in the short term. Signing the agreement would have been the only way to keep Lionel Messi at the club, but Laporta said he would not put the club’s future at risk.

LaLiga president Javier Tebas, though, says Laporta did initially support the deal but pulled out when Madrid rejected it. Speaking last weekend, Tebas said Madrid have a hold over Barca, suggesting president Florentino Perez has “kidnapped” them and is influencing their decision-making.

The two clubs, along with Juventus, are also the only remaining members of the European Super League project, which has been frequently criticised by Tebas.

‘Hit him’ – Keown opens up on how to stop Lukaku