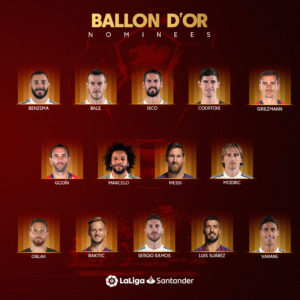 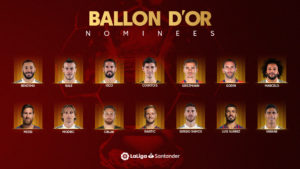 The 30 finalists for the individual award have been announced, 14 of which play their football in Spain’s top flight, .

France Football, the magazine behind the Ballon d’Or award for the best footballer in each calendar year, has revealed a 30-man shortlist for the 2018 prize with La liga players dominating the list.

In total, 14 of the 30 players on the shortlist are based in the top division of Spanish football, LaLiga Santander, which is a record for a league under the current format.

Since the Ballon d’Or award decoupled from FIFA three years ago and the announcement 30-man shortlists, LaLiga has seen 13 players nominated in 2016 and then 11 in 2017, which on both occasions made it the best-represented league.

For this year’s award, there are three other leagues with players featuring on the list. The English Premier League has 11 players on the shortlist, while France’s Ligue 1 has three and Italy’s Serie A has two – one of whom is Cristiano Ronaldo, who was playing in Spain for the first half of 2018.

Looking at the players nominated from LaLiga, Real Madrid have the greatest share with eight members of their squad having been considered amongst the best 30 players in the world for the current calendar year. These players are; Thibaut Courtois, Raphaël Varane, Sergio Ramos, Marcelo, Luka Modrić, Isco, Gareth Bale and Karim Benzema.

Barcelona and Atlético Madrid both have three players each on the list. Ivan Rakitić, Lionel Messi and Luis Suárez represent the Blaugrana, while Jan Oblak, Diego Godín and Antoine Griezmann fly the flag for the Rojiblancos.

Each of these three clubs will feel they have a strong candidate to go on and win the prize. Barcelona’s Messi already boasts five Ballon d’Or gongs and is searching for his sixth. Atlético’s Griezmann will believe he has a good chance of improving on his third-placed finish from 2016 having picked up the World Cup, Europa League and UEFA Super Cup in 2018. Then Real Madrid’s Modrić must be considered a favourite too after recently winning FIFA’s The Best award as the top player of the 2017/18 season.

There have previously been six all-LaLiga podiums for this prize. On December 3rd, we’ll find out if there is to be a seventh.

Mayweather Moves Round the World in Birthday Gift Private Jet