By Taofeek Babalola  Last updated Jan 22, 2019 0
Gombe United Technical Adviser Ladan Bosso says his understanding of Kano Pillars’ pattern of play will give his side added advantages when both teams meet in today’s matchday 4 encounter at the Pantami Stadium, Gombe.
Bosso, who was in charge of Kano Pillars in 2013/2014 season as technical adviser, said he will work on Sai Masu Gida’s weaknesses to secure victory.
He said the abridged league is very difficult and any mistake would be disastrous.
“As a former coach of the club, I have their password. A good coach should be able to have an edge over his former club. Because I know their tradition and culture, we will work on that,” Bosso said. 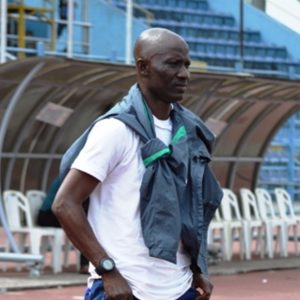 The former Abia Warriors gaffer also appealed to the teeming fans and supporters to come out en masse to ginger Savannah Scorpions to victory.
The Niger State-born tactician also enjoined the home fans to shun any act of hooliganism before, during and after the game in the best interest of the club.
Bosso described the Savannah Scorpions supporters as ” peace lovers and adherents of Fair Play.”
Loading...
Gombe UnitedKano Pillars Football ClubNigeria Professional Football League( NPFL)