Spectators at the recent Lagos Monthly Boxing Show staged at Mobolaji Johnston Sports Centre, Rowe Park, got more than their money’s worth after Kayode Mubarak and Afeez Osoba treated them to some good boxing.
The 99th edition of the premier amateur boxing competition organized by the Lagos State Boxing Hall of Fame and Lagos State Amateur Boxing Association was well attended and the young boxers put up a good performance. 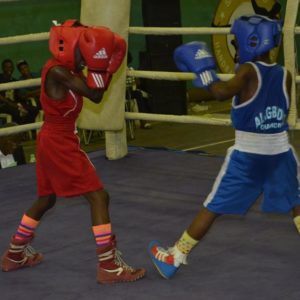 Mubarak, from Kamlat Boxing Club was too quick for Hard Punch Boxing Club’s Hamed Lawal and thrilled the fans with his moves to record a 5-0 unanimous win.
Jimoh Afeez of Metallic Boxing Club could not stand the punches of a very confident Afeez Osoba of Confidence Boxing Clud as he was knocked out in the 3rd round of their 69kg fight, then Dayo Okenla of Always boxing Club won by superior points over Supreme Boxing Club’s Abayomi Yakubu.
In the first female contest, 2013 & 2018 Governor’s belt winner, Ayisat Oriyomi beat Shukurat Kareem of Brightest Boxing Club 5-0 unanimously before Mutiat Akanbi of Always Boxing Club beat Abibat Ufoge of Owonikoko Boxing Club by the same scores in the second bout.
Kareem Taofeek of Brightest Boxing Club beat Rilwan Mustapha of Olu-Omo Boxing Club in a split decision, then Toheeb Hassan of Smart Boxing Club beat Abeeb of Aso Rock Boxing Club.
After winning the ‘Boxer of the Month’ award, Kayode Mubarak commended the promoters for giving amateur boxers the chance to entertain boxing fans every month.
16 year-old Mubarak started boxing at the age of five and recently got admitted to the University of Lagos to study Human Kinetics.
He won a gold medal at the Junior Youth Games in Ilorin and a bronze medal at the Festival Games in Abuja last year.
“I want to be a great boxer one day and win many world titles,” he told The Nation.