Four second-half goals steered Barcelona to a routine 4-0 victory at Cadiz on Saturday as they moved top of LaLiga.

Frenkie de Jong and Robert Lewandowski put the Catalans in front before a lengthy stop in play due to an illness in the crowd saw the players go off the field before returning to play out the final 10 minutes.

Lewandowski teed up Ansu Fati for the third in the 86th before Ousmane Dembele rounded off the scoring in stoppage time.

Barca have 13 points from five games, one ahead of second-placed Real Madrid who host Mallorca on Sunday.Their coach Xavi Hernandez named a much-changed side from Barca’s 5-1 midweek Champions League triumph over Viktoria Plzen and, one Raphina shot that hit the post aside, they rarely troubled the hosts in a dull first period.

“It’s a good win at a difficult place to come. It keeps us up there at the top of the league,” he said.

“Whoever plays, there’s no drop off, we’re in a good place and I’m happy with the result. The main thing was getting the first goal. We were patient but we just lacked that final ball, but in general I’m happy with what I saw.

“We’re going to be making changes in the side throughout the season as we need to control minutes, there’ll be suspensions and injuries too.” 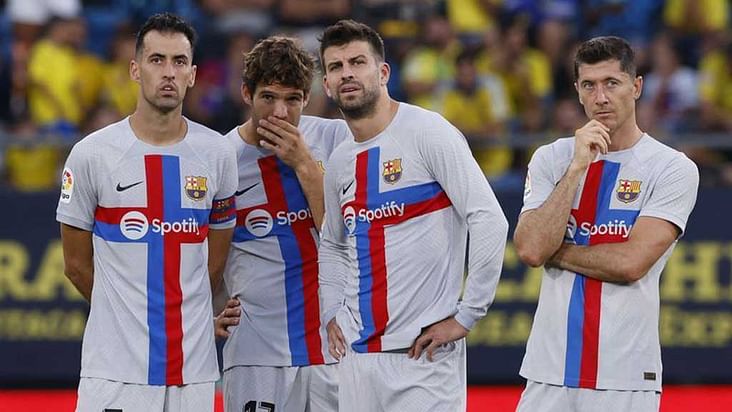 Barcelona did not have to wait long following halftime to make the breakthrough as De Jong fired into an open goal after Cadiz keeper Jeremias Ledesma parried a Gavi cross into the Dutch midfielder’s path in the 55th minute.

Lewandowski, who came on as a substitute after the goal, continued his fine start to life in Spain with Barca’s second 25 minutes from time to put the visitors in command.

As the game reached its conclusion there was a half-hour stoppage to treat the ill fan before play could resume, with Fati and Dembele putting the gloss on the scoreline.