Chelsea boss Frank Lampard did not hold back in his assessment of the Blues’ performance in Saturday’s FA Cup final defeat against Arsenal.

Lampard’s side were beaten 2-1 at Wembley, with Christian Pulisic’s early goal giving them the lead before a double from Arsenal striker Pierre-Emerick Aubameyang turned the game around.

Speaking after the game, it’s clear Lampard was not at all happy with the way his players approached the game, as he seemed to lay the blame squarely with them for treating a big game like a “stroll”.

In general, it’s been a decent first season for Chelsea’s inexperienced young manager, who inherited a difficult job as he arrived at Stamford Bridge with the club under a transfer ban. 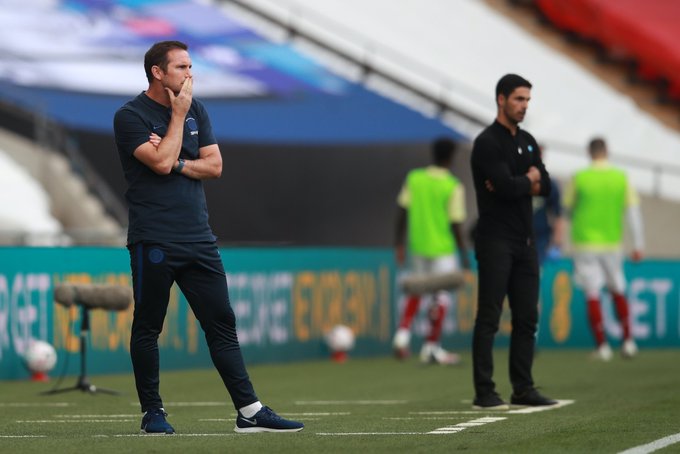 Chelsea will be glad to have ended up in the top four, securing Champions League football for next season, but it will no doubt be a blow for the west London giants to finish the campaign without a trophy.

Lampard could not hide his disappointment afterwards, saying, as quoted by BBC Sport: “We got complacent, took time on the ball like it was a stroll. We didn’t play well enough to win a final. A lot of today is on us.

“We started well for 10-15 minutes and we can only blame ourselves from that point.

The Blues fall to defeat in the final. 😔

Credit to the lads for a fantastic cup run, it just wasn't our day today.#HeadsUpFACupFinal pic.twitter.com/BoCl2X7UVv

“A final can never be a stroll and we allowed them back into the game. We were slow, we played back on ourselves, invited pressure.

“At the start of any new partnership it is important to show maximum respect and we have done that by concentrating on the club’s core identity. What you have is a clean, strong design, which any fan would immediately know belongs to Liverpool.”

Brazilian Legend claims he has ‘better physique’ than Ronaldo