This is not the best of time for Super Eagles striker, Kelechi Iheanacho at his English Premiership club – Leicester as the fans of the former Premiership champion are lamenting over the £25m the team paid to acquire the Nigerian from Manchester City in 2017.

In an article published on Leicestershirelive and written by Jamie Kemble, Iheanacho was described as a possible flop in the colours of Leicester City. 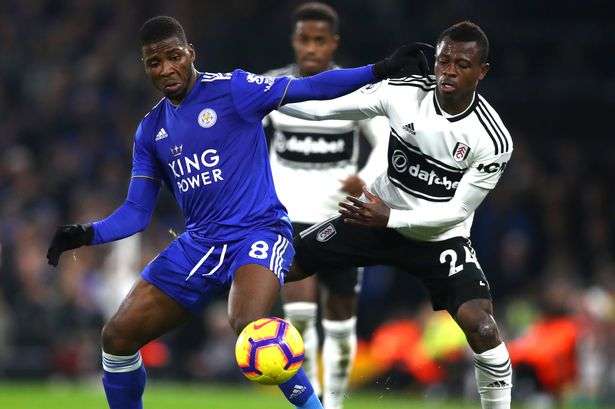 In his description, Kemble wrote, “The Nigerian international is now in his second season with the Foxes, and his form hasn’t improved, in fact, it has deteriorated even further. He came into the campaign in fine form, scoring four goals in three pre-season games after returning from World Cup commitments in Russia with Nigeria. However, that pre-season form hasn’t translated to the Premier League.

“Iheanacho has scored just one goal in his 22 appearances this season -13 of those outings have come via the bench.He has managed four assists, but in terms of goals, he’s still not delivering on his £25 million price tag. The 22-year-old has averaged just 0.7 shots per game this season and has an average of a goal every 869 minutes.

“He is in the bottom 10 players in the Premier League in terms of average rating, based on WhoScored stats, accumulating a performance average of 6.28 per game.

According to Kemble, a season-and-a-half after arriving at the King Power Stadium, Coach Claude Puel and the Blue Army are running out of patience with their once-billed ‘new star striker’.

Explaining the rationale why Leicester splashed £25m on Iheanacho, Kemble wrote, “Iheanacho joined Leicester City from Manchester City for a reported fee of £25 million in 2017 and at the time, he was still being billed as one of the Premier League’s brightest up and coming talents. Man City actually had to battle off plenty of other interested clubs to sign him in 2014 following his terrific performance in the 2013 under-17 World Cup. He had impressed at Manchester City, scoring eight in 26 during his first full season in the first team with 19 of those outings being from the bench, and then scoring four and assisting three in 20 appearances, 15 of which were off the bench.”

“It’s true that Iheanacho wasn’t seen as a superstar striker, the sort of which you need to be to displace Sergio Aguero and co, but he was certainly viewed as a striker who would go on to have a successful Premier League career.

“As a youngster at Manchester City, he showed a great attitude, coming off the bench and putting in very decent displays, and he appeared hungry to continue his development when Leicester City came knocking, looking to invest some of their Champions League earnings in 2017. On paper, it was a bold yet potentially shrewd move from City who had, and still has, youth In his first season in the East Midlands; Iheanacho scored three goals in 21 appearances, also setting up three. He averaged just 1.3 shots per game, netting a goal on average every 9.6 shots.

With this, Iheanacho’s first season didn’t go down too well given the fee paid for his services.

The Nigerian has been considered a perfect replacement for star striker Jamie Vardy who has struggling in front of goal this season, but Iheanacho has not taken up the gauntlet. Iheanacho has only netted one goal in 22 appearances this season.

According to Kemble, from Iheanacho’s point of view, he has to show desire; he has to earn his place in a team that needs a little help. This is the time to stand up, put in performances and win over the fans that need someone to put a smile on their face.

“This may be the best opportunity Iheanacho gets to prove his worth, but first he will have to break out of this torrid vein of form and a goal drought dating back to last September. Failure to do so, and he will join Islam Slimani in becoming Leicester City’s next £20million+ flop,” Kemble added.