By Our Reporter On Jul 30, 2018 0
Lewandowski
Robert Lewandowski will not leave Bayern Munich despite the reported Real Madrid target’s open interest in a new challenge.
Lewandowski’s agent, Pini Zahavi, has previously confirmed his client’s hope to move on from the Allianz Arena.
European champions Madrid have long been linked with the Poland international, who would go some way to easing the goalscoring burden left by Cristiano Ronaldo’s departure to Real Madrid. 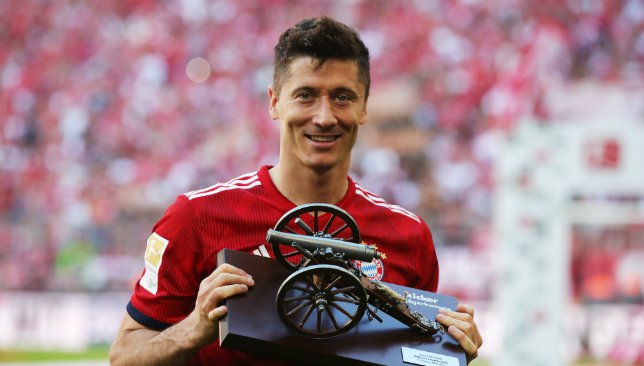 Borussia Dortmund CEO Hans-Joachim Watzke added further fuel to the transfer speculation by revealing he would be willing to spend €100million to bring Lewandowski back to his former club.
“There’s nothing new with Robert, it’s clear that he will not leave this club because we have a top striker and we certainly do not want to relinquish him or give him away,” Zahavi told Sky Sport Germany.
“We want to achieve a lot with him. He is a great footballer, who has achieved a lot in the Bundesliga, scored many goals and now in the new season certainly will score many goals.”
Though he acknowledged Lewandowski’s interest in leaving, Zahavi described the 29-year-old as a “full professional” that would not attempt to force a move.
“It’s true that Robert toys with going elsewhere. Only [he has] one thing he likes, the other is what we like to do,” the former Eintracht Frankfurt coach said.
“Robert has a contract – I do not know how long – and he will certainly stay as long as possible here.”
Loading...
Robert Lewandowski