Mohamed Salah and Sadio Mane both scored twice as Liverpool thumped Huddersfield 5-0 move back to the top of the Premier League with just two games remaining.

It took Naby Keita just 14 seconds to open the scoring – Liverpool’s fastest Premier League goal – before Mane and Salah got in on the act before the interval. 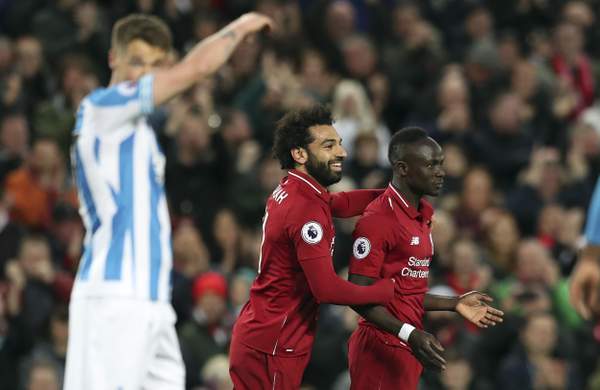 Mane headed home his second of the night midway through the second half and Salah also doubled his tally with a finish from close range to finish off the rout.

Reds boss Jurgen Klopp made three changes from the side that beat Cardiff last weekend, with Dejan Lovren, Jordan Henderson and Daniel Sturridge coming into the side.

But the changes didn’t appear to affect his side as they settled any pre-match nerves in the quickest way possible.

It took just 10 seconds for Jan Stankovic to find himself surrounded by red shirts and the Slovenian’s pass went straight into the path of Salah.

Despite signs of a Liverpool onslaught, Huddersfield rallied after an awful start and gave the Reds something to be concerned about as Stankovic’s deflected effort nearly found the top corner.

But the title challengers soon put the game beyond doubt when Mane was left alone in the Huddersfield box to head home from Andy Robertson’s cross.

There was time for a third just before the break as Trent Alexander-Arnold found Salah with a fine curved pass and the Egyptian cleverly looped it over the onrushing Lossl to pile further misery on the hapless visitors.

The tempo of the game died down somewhat in the second half and Huddersfield should have got one back when Steve Mounie was put through on goal but the out-of-form striker dwelled on the ball for far too long.

It was four on 66 minutes when Mane was again given far too much room to head home from Jordan Henderson’s cross and soon Liverpool were beginning to target the goal difference deficit which left them vulnerable to Manchester City in the title race.

A hat-trick beckoned for Mane when substitute Xherdan Shaqiri found him with a fine cross but this time the Senegalese struck the post.

But Liverpool weren’t done there as Salah tapped home from another Robertson cross to ensure Liverpool’s five-star performance was accurately reflected by the scoreline.