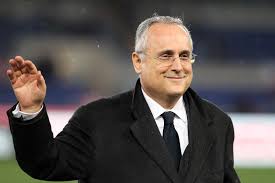 Speaking to TyC Sports in his native Argentina last night, Lopez claimed ‘World War would break out’ if Serie A stopped and the Scudetto was awarded to Juventus.

More controversially, however, he described Lotito as ‘President of the FIGC’.

“If Italy does what the French did, a World War would break out,” he told the sports broadcaster.

“For him, it was possible to play a month ago. Here, a more important entity such as UEFA or FIFA will have to make a decision.”

That was followed by Crotone announcing in a statement that they had ‘distanced themselves’ from the 36-year-old’s remarks.

Furthermore, the Serie B side confirmed ‘disciplinary action’ could be taken against the player as a result.

It is not clear whether Lopez was being tongue-in-cheek or merely misinformed, given the Lazio patron also serves as a federal counsellor for Lega Serie A.

Napoli to resume training on Monday