Manchester City boss, Nick Cushing, is to leave the Women’s Super League club after more than six years in charge. 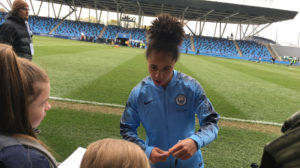 The 35-year-old is to take up the assistant manager’s position at men’s team New York City of the MLS in the United States.

His final match as Manchester City boss will be at home against WSL champions Arsenal on 2 February.

Cushing, who said the decision to join Ronny Deila’s New York City was not “taken lightly”, has been the club’s only manager so far in the WSL era since they joined the top flight in 2014.

“We’ve had an amazing six and a half seasons and I have thoroughly enjoyed working with everybody – I will be extremely emotional to leave,” he told Manchester City’s website.

“Linking up with New York City and Ronny (Deila) is a brilliant opportunity and I’m really looking forward to working in the MLS.”

He will leave City with 18 months left on his contract, having signed a three-and-a-half-year deal in December 2017.