Manchester United manager, Ole Gunnar Solskjaer, is excited by the prospect of naming Bruno Fernandes, Paul Pogba and Marcus Rashford in what is a mouth-watering attacking line-up. 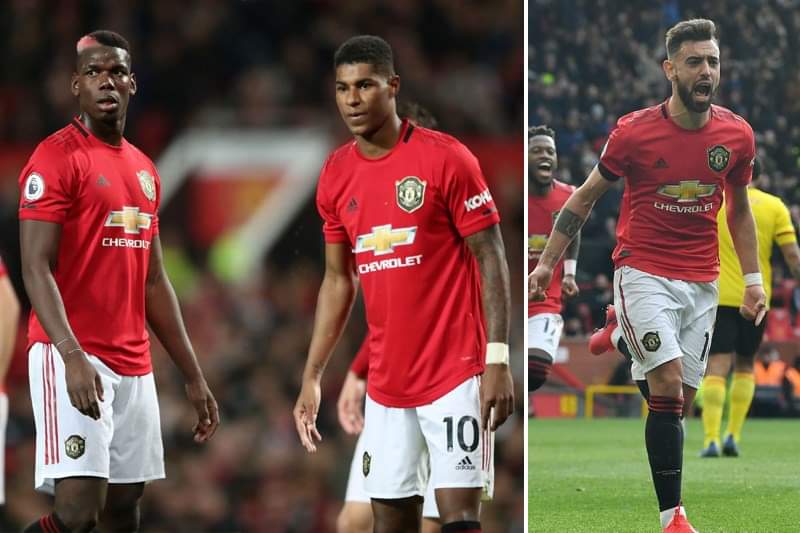 Fernandes has been a revelation since joining from Sporting in January, helping the Reds to enjoy an 11-match unbeaten run across all competitions before football was postponed back on 13 March.

The Portuguese is yet to play with long-term absentees Pogba and Rashford, but that possibility could soon become a reality as the duo both continue to work hard on their rehabilitation at home.

During an interview with Sky Sports on Friday morning, when asked about Fernandes and Pogba playing together, Solskjaer could not hide his enthusiasm for the squad that he is building.
Michael Carrick.

“Good players can always play together, so definitely, they can – it’s a big yes,” said the manager. “I think it’s exciting. We do have an exciting squad. I’ve got Scott (McTominay), Fred, Nemanja (Matic). There’s many games coming up and I’m sure we can find a good connection between them.

“We’ve been discussing that as a coaching team of course, and we’re looking forward to it. Of course, Bruno coming in, making the impact he made, it was a boost for everyone, the club, supporters and players. Getting Paul and Marcus Rashford back would be fantastic.

“Paul has had a difficult season with injuries, and Marcus as well is getting back. So for us – and for them too – this gives them a chance to start on a par or even ahead of other players.”

It was confirmed this week that all of United’s overseas players have returned to Manchester and that training has stepped up, although a return to the Aon Training Complex is yet to be announced. Talks are ongoing about when the Premier League season will resume, yet Solskjaer is confident the Reds will be in top physical condition and more than ready to fight for success on three fronts.

“We’ve got loads at stake,” Ole told Sky Sports today. “We’ve just started to find form, three points behind Chelsea, we’ve got nine games, so we’re hoping to move up the table. That’s what we’ve got to do, and whenever that starts, and we’re going to try to catch them.

“Now, it’s about getting them together as a group. That’s a strange scenario; we’ve been working in a team environment all these years, you’re used to the connection with the boys, shaking hands, giving them a hug if they need to. Now with all this, that’s gone, so that’s my main concern: how we get back and how we’re going to build that environment again.

“We’ve always got this pressure at Man United of trophies, winning the next game. We’ve been through a difficult season, a rebuild – I think everyone knows that and has seen that. And I think we’re starting to see something exciting. We’re still in the FA Cup, we’d like to win it, the Europa League we’re still in. Of course, we’d like to win trophies. I think the players we have are exciting, and they’re getting better and better, most of them are improving. What we’re working towards – with the principles and the way we want to play – yes, we’re settled defensively, we want to get more exciting attacking-wise, but with Marcus back, Bruno and Paul back, you’d expect us to be more exciting.”
Harry Maguire.

During his interview with Sky Sports, Solskjaer was also asked about the transfer market and the manager stressed he is happy with the squad – although the club is always looking for new talent.

“I think Mason (Greenwood), Anthony (Martial) and Marcus have been fantastic this season, they’ve scored almost 50 goals between them,” said Ole. “Marcus got his injury, [but is] on course for his best season, Anthony too, and Mason, of course, is just a unique talent with his goalscoring ability.

read also:Ighalo would like to finish the season with Man Utd

“But we’re always looking to improve the squad. This uncertainty in the market now, who knows how football and the market is going to be, but I’m very happy with the squad I’ve got.

“Today’s world is different to what it was two months ago. We’ve got to adjust, adapt, there’s clubs out there struggling more than us financially. It’s a new world, and I think the transfer market this summer will be completely different to what anyone thought it would be.”

Obasi: Why I was dropped from Super Eagles 2014 World Cup squad