Maradona left the Olivos clinic in Buenos Aires by ambulance shortly after his doctor Leopoldo Luque told reporters he could go home.

Luque had earlier published on Instagram a photo of himself hugging the 60-year-old, who wore a bandage on his head.

Maradona is expected to continue his rehabilitation in Tigre, 30 kilometers (19 miles) north of Buenos Aires, near his daughter Giannina’s home.

“Diego has gone through perhaps the hardest time of his life,” his lawyer Matias Morla said earlier Wednesday, adding it was a “miracle” that the clot “which could have taken his life, was detected.”

“What is needed now is family togetherness and being surrounded by health professionals,” said Morla. “With the doctors and his family, Diego will be as he should be: happy.”

The World Cup-winning former Argentine captain underwent surgery last Tuesday to remove a clot lodged between his brain and skull.

He had looked unwell during a brief appearance on October 30 to mark his 60th birthday at the stadium of Gimnasia y Esgrima, the Argentine Primera Division team he coaches.

He seemed to have difficulty walking and did not stay to watch his team’s game.

The following Monday, he was taken to hospital in La Plata, where the club is based, suffering from symptoms of anemia and dehydration.

Tests revealed the blood clot, after which Maradona was transferred to a specialist clinic in the capital.

Maradona has been admitted to hospital three times in the last 20 years for serious health issues — two of which were potentially fatal — due to his drug and alcohol addictions.

Last week, his doctor had said the football icon would require prolonged treatment in a clinic with different specialties than the current one.

Maradona’s daughters Dalma, Giannina and Jana have visited him daily at the clinic.

His oldest son, Diego Jr, who lives in Italy, announced last Thursday on social media that he had tested positive for Covid-19 and therefore would not be able to travel to Buenos Aires.

Due to Maradona’s age and previous health issues, he is considered high risk in relation to the coronavirus pandemic, which has hit Argentina hard. 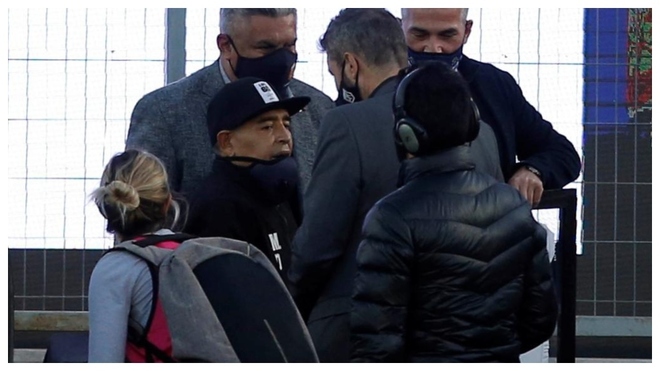 Several times in the last eight months he has been in isolation and was forced to stay at home recently after a bodyguard showed coronavirus symptoms, although he later tested negative.

Alongside Brazil’s Pele, who turned 80 last month, Maradona is widely regarded as one of the greatest soccer players of all time.