Maradona ‘much better’ than Messi – Pele

Former Brazil forward Pele has stated that Diego Maradona was a “much better player” than Lionel Messi — adding that Barcelona No. 10 “only shoots with one leg, only has one skill and doesn’t head the ball well.”

No one has won the Ballon d’Or on more occasions than Messi, who has five, but only finished fifth in the voting for the same honour in 2018 — and was voted as ESPN FC’s best forward. 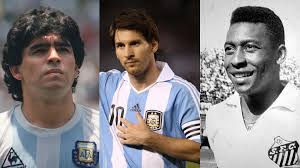 But Pele said he rates the 1986 World Cup winner — as well as two other former players — higher than Messi.

“As far as I’m concerned, Maradona was one of the best players ever,” Pele, a three-time World Cup winner with Brazil, said to Folha de Sao Paulo. “If you ask me:

‘Was he better than Messi?’ Yes, he was. Much better. Is there such a thing as peaking too early? Given all that Kylian Mbappe, just 19, has accomplished, we might soon find out.

Pele, meanwhile, said no one should try to compare him with Messi, suggesting their skill set was completely different.

Azubuike delighted to return after suspension