By Our Reporter On Jul 13, 2021 0
Street artist Akse fixes the Marcus Rashford mural after vandalism.

A mural of Marcus Rashford in Manchester has been restored after it was vandalised on Sunday following England’s Euro 2020 final loss to Italy on penalties.

Rashford was one of three England players who failed to convert their spot-kicks — Jadon Sancho and Bukayo Saka were the other two — and all three were subjected to online racist abuse.

The mural, a community street art project based on a photograph by Daniel Cheetham and painted by street artist Akse, was made in Rashford’s honour in Withington, Manchester, and read: “Take pride in knowing that your struggle will play the biggest role in your purpose.”

After it was vandalised, fans covered the offensive graffiti with messages of support and admiration for Rashford.

The 23-year-old said he was “on the verge of tears” after fans left the caring comments.

“The communities that wrapped their arms around me continue to hold me up,” he said on social media. He also tweeted out images of positive handwritten notes he has received.

“I can take critique of my performance all day long … but I will never apologise for who I am and where I came from.”

Akse returned to the mural on Tuesday to cover over the offensive graffiti, moving the notes fans had left to the side and up around the corners of the wall, with Rashford sharing images of people gathered around the site.

United manager Ole Gunnar Solskjaer has backed his young player to bounce back from the penalty miss and disappointment of the final.

“You know the thing is when you step up to take a penalty, I think you’ve already won,” Solskjaer told United’s website. “You’ve taken on the responsibility, and I’m sure many of the players are hoping I don’t want to take a penalty.

“So I think it’s a great character trait to step up and say I will deal with it, [and] the consequences. You learn from it and definitely come back stronger.”

Rashford has been hailed for his work in campaigning for free school meals for the most vulnerable of children in British society.

However, following his penalty miss along with Sancho and Saka, all three were the targets of racist abuse on social media.

“The FA strongly condemns all forms of discrimination and is appalled by the online racism that has been aimed at some of our England players on social media,” an FA statement read. 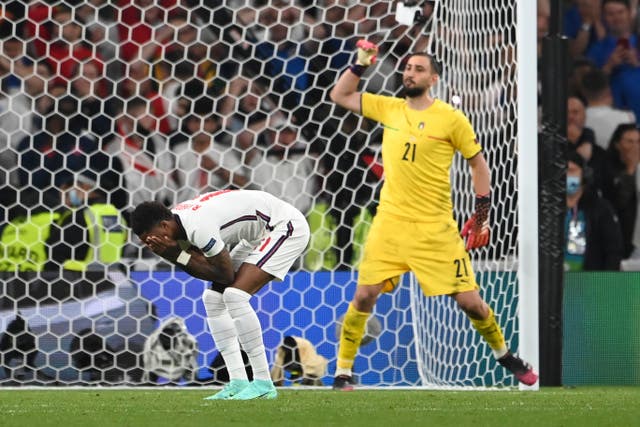 “We could not be clearer that anyone behind such disgusting behaviour is not welcome in following the team. We will do all we can to support the players affected while urging the toughest punishments possible for anyone responsible.”

British Prime Minister Boris Johnson and representatives of Twitter spoke on on Tuesday where they discussed the social media platform’s approach to online abuse.

“There is always more to do and we are committed to working together with the government, industry partners and civil society in building a safer Internet for all,” a Twitter spokesperson said in an emailed statement.

New Roma goalie hails Mourinho as ‘one of the greatest’ managers

Tokyo Olympics: Most of Australian athletics team out of isolation

Skateboarder protest over ‘lack of fresh air’ in Tokyo…

Tokyo Olympics: Most of Australian athletics team out of…