Mario Balotelli has completed the latest move in his nomadic career by joining Marseille until the end of the season.

The former Liverpool and Manchester City striker was allowed to leave Nice on a free transfer after falling foul of manager Patrick Vieira. 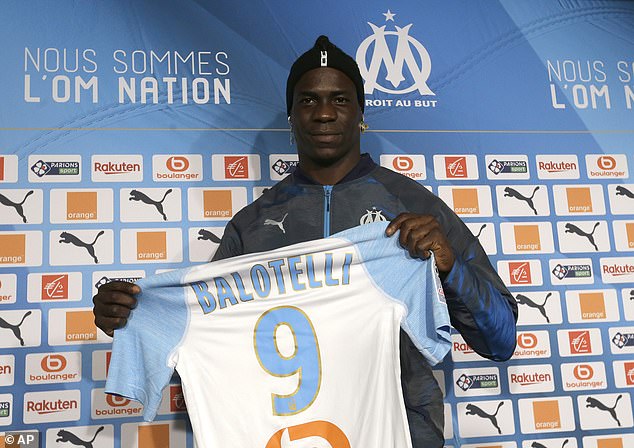 Marseille announced their new signing to the world via a video on social media showing three men doing parkour through the city before painting a graffiti mural of Balotelli.

Sky Sports Italia are reporting that Balotelli will earn £2.7million for just 17 games at Marseille.

The controversial Italian, 28, found the net 33 times in his first two seasons in Ligue 1 but failed to replicate that form under new boss Vieira, playing just 10 times without scoring a single goal.

‘When this happens the striker is responsible for the situation but sometimes there are external factors. I was supposed to leave at the beginning of the season, then I didn’t leave,’ Balotelli told a news conference. ‘But I will make up for it.’

His sponsors, Puma, also released a mocked-up image of him wearing a Marseille shirt under the blue Manchester City kit he once lifted to show a t-shirt with the words ‘why always me?’

Asked what his ambitions were, he joked: ‘My ambition is to finish this news conference, go to training and see if I can play on Friday.’

Marseille are seventh in the table, level on 31 points with eighth-placed Nice, who have played a game more. They take on second-placed Lille on Friday, but coach Rudi Garcia said Balotelli would at best come off the bench.

‘He hasn’t played or trained for a month, it is impossible to see him start on Friday,’ Garcia told reporters.

Vieira revealed his obvious frustration with Balotelli earlier this season, saying: ‘When it comes to Mario, I want to answer back, or just slam him up against the wall or leave him hanging by his collar on the coat rack, but I can’t, as I’m no longer a player.’