Lionel Messi missed training on Monday and is a major doubt for Barcelona’s Copa del Rey semifinal-first leg against Real Madrid on Wednesday. 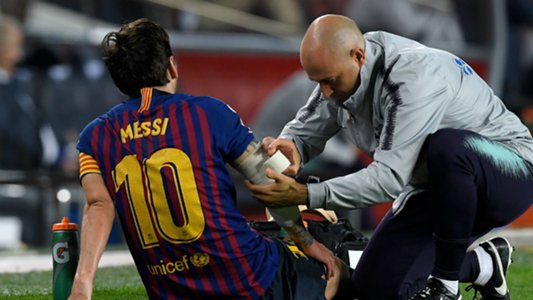 Messi, 31, injured his thigh in Saturday’s 2-2 draw against Valencia but was able to finish the game.

Barca coach Ernesto Valverde played down fears over the injury after the match, and sources told ESPN FC the club were optimistic that Messi would be available against Madrid.

But after having Sunday off Messi still had pain in his thigh when he arrived at the training ground on Monday, and will undergo tests to determine the extent of the problem.

Valverde is unlikely to take any risks with Messi as Barca prepare for an intense run of games this month.

They face Madrid before travelling to Athletic Bilbao on Sunday, with Real Valladolid then due at Camp Nou before trips to Lyon in the Champions League and Sevilla in La Liga and back-to-back games at the Bernabeu in the Copa del Rey and the league.

Read Also: I never expected to have so much success – Messi

Messi missed the first Clasico of the season with an elbow injury, but that did not stop Barca from beating Madrid 5-1. They also defeated Inter Milan in the Champions League without him.