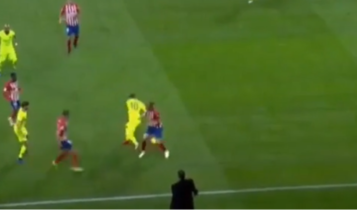 Pretty much everyone who comes up against Lionel Messi ends up getting embarrassed by him one way or another. For once a defence managed to keep him quiet on Saturday but he still had a moment against Atletico Madrid.

Coming up against Lionel Messi can’t be fun for a defender. Whether he’s passing, running or scoring round you the Barcelona superstar always has a way of leaving a lasting impression and it’s pretty difficult to stop him.

However the club’s all time top goalscorer still managed to have a big effect on one of Atletico’s defenders.

The Barca captain’s tasty little controlled flick through Luis’ legs game him a lovely nutmeg and you only hope he screamed ‘megs’ as he ran away from the Brazilian:

Luis though wasn’t the only one. The five time Ballon d’Or winner also made a mockery of one of the men up for the award this year, Antoine Griezmann.

The Argentine ripped the Frenchman apart just before half-time, dribbling past him with ease as the Atletico striker looked on, wondering if he had indeed left the oven on at home.

It was a close game throughout, with both teams eventually taking away a point from the Wanda Metropolitano thanks to a last gasp goal from Ousmane Dembele.

But this moment involving Messi and Griezmann stole the show. Antoine just doesn’t know where to look. “How did he just do that?”

It soon became a viral meme. Of course it did.