Akwa United’s Mfon Udoh has tipped his previous club, Enyimba, Lobi Stars and FC IfeanyiUbah to pick the three available playoff spots but reckoned that the Promise Keepers will emerge as the league champions. 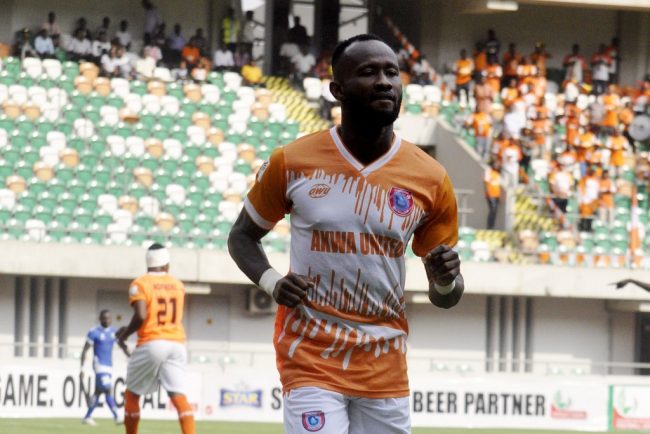 The Promise Keepers, Kano Pillars, and Enugu Rangers have already booked the initial three spots with the remaining three to be decided in the final day of the season across the federation this weekend.
Udoh who is the Nigeria Professional Football League leading scorer with 10 goals opined that his former employers, Enyimba and the duo of Lobi Stars and FC IfeanyiUbah have done enough throughout the course of the season that they deserve to be in the Super Six but that Akwa United will crush all of them to lift their first league title at the end of the season.
“From my point of view I will say that Lobi Stars, Enyimba and FC IfeanyiUbah will pick the three remaining tickets to ensure that we have a very competitive Super Six but none of them can stop Akwa United from winning the league title,” Udoh told SportingLife.
“I am not saying that they will just get straight away. They are aware they must secure positive results from their concluding fixtures of the season to ensure that they qualify. We are not bothered by any of the remaining five qualifiers because we know what we are capable of and we are going to surprise them all to lift the title.
“I am delighted to have scored 10 goals but I will be pleased to see my team emerged as the league champions. It will be historic in the history of the club and I will like to be part of it. I have returned back home to revive my career and also to win a piece of silverware just like the club has done in the Aiteo Cup two years ago.”
Udoh further disclosed his desire to ensure that his other teammates have a fair share of playing opportunities made him ask the technical crew to substitute him during the halftime of their home game with Abia Warriors and that he was happy that his replacement, Ocheme Edoh scored their equalizing goal in the game which ended 2-2.
“I wasn’t injured against Abia Warriors but I just asked to be substituted to give some other players opportunities to be used as we have already qualified for the Super Six,” Udoh continued.
“Our priority should be what we must do to do well during the Super Six. We won’t go to Nnewi with a weakened side but in my own view, I feel some players should be rested having had a long uninterrupted season ahead of the weekend game.
Loading...
Akwa UnitedMfon UdohNigeria Professional Football League( NPFL)