Former Super Eagles captain John Obi Mikel has revealed he opted to sign for Chelsea ahead of Manchester United in 2006.

Mikel spent 11-successful years at Stamford Bridge after joining from Norwegian club Lyn Oslo. However, the transfer was one of the most controversial deals in the last two decades.

The former Nigerian international had initially signed for Manchester United, but later claimed he was forced to sign for the Red Devils.

As a result, it created a legal battle between Lyn Oslo, Man Utd and Chelsea, while FIFA also intervened. This long-drawn saga left Mikel’s career in limbo as he was out of action for six months.

At the end of the legal battle, Mikel eventually signed for Chelsea with the Stamford Bridge dwellers paying a compensation fee of £12m to Manchester United and £4m to Lyn for the Nigerian services.

It was a move that left many Nigerians baffled as they felt Obi’s chances of success would be higher if he had gone to Man Utd instead of Chelsea, who had a host of world-class names in their squad then.

During the period under review, three of Mikel’s teammates at Nigeria U-20 level, Chinedu Obasi, Emmanuel Sarki and Ezekiel Bala, were also undergoing trial at Stamford Bridge.

Mikel claimed that if he had not signed for the Blues, Chelsea would have ended the three players trial.

“When I chose Chelsea, it wasn’t just my life that changed,” Mikel told The Athletic.

“There were four lives that changed. Why? Because if I didn’t, Chelsea might not have anything to do with my three friends. I was close to them. I knew their families. 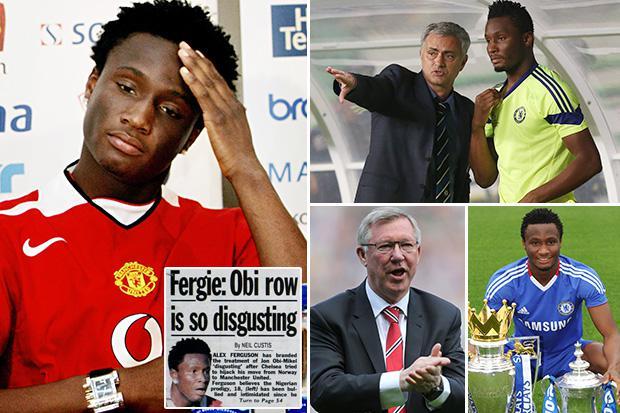 Interestingly, despite Mikel’s gesture, the three players would go their separate ways in subsequent months as Chelsea did not offer them a contract.

Bala is currently with Rosseland BK, while Sarki is plying his trade in Poland with Gornik Myslowice. Chinedu Obasi, the only member of trio who had a fairly decent career, is currently without a club after he was released by SCR Altach in July.

On the other hand, Mikel before leaving Stamford Bridge before in January 2017, lifted two Premier League titles, three FA Cups and the Champions League in 2012.