Pier Morgan has blasted Kyle Walker and his “disgusting hypocrisy” for hosting a sex party before urging fans to stay at home. 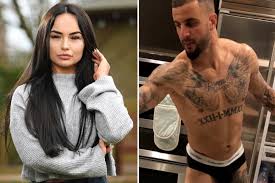 The UK Sun on Sunday reported how the Manchester City star had two escorts at his £8,000-a-month rented apartment the day before he told supporters to follow advice to stay home to help the NHS.

Walker, 29, has since apologised but now faces a potentially huge fine from club bosses for ignoring health and social distancing guidelines.

The England ace – who was also seen out and about with Wayne Rooney during the lockdown – has been slammed by Good Morning Britain host Morgan for his actions.

He delivered a four-and-a-half-minute tirade against Walker and Aston Villa star Jack Grealish – who crashed his £80,000 car just hours after also telling fans to stay home.

Morgan said: “Kyle Walker, multi-millionaire, Manchester City football player. Another one, who rather like Jack Grealish, had given one of those rousing messages to the country telling us to stay in, obey the rules, don’t do anything stupid.

“Literally within a day, he’d hired two escorts to come to his home for him and his friend.

“You think, ‘what could be more reckless than that?’

“Once again, a privileged, rich football player – and I’m not generalising them – but these two were telling us all how to behave and then doing the complete opposite.

“It’s disgusting hypocrisy. It’s unbelievably selfish and reckless. When the players behave like that they bring a stain on the whole industry.

“For them to do what they’re doing, having done videos lecturing to the rest of us on what to do, is utterly shameful.

“Other players have to get a grip of maybe some of the younger, more wayward ones and say, ‘this matters’.

“You are tarnishing this sport in a potentially irrevocable way. People will have long memories after this. They’re not going to put up with it, about any of this kind of behaviour.

But, much like Morgan, that apology did not wash with former Spurs star Jamie O’Hara.

He branded Grealish “completely idiotic” and claimed he only apologised because he got caught.

Walker issued a grovelling apology, accepting his behaviour was in “direct contrast” to his pandemic message.

A statement read: “I want to take this opportunity to issue a public apology for the choices I made last week.

“I understand that my ­position as a professional footballer brings the responsibility of being a role model.

Van Dijk: I want to be a Liverpool legend