Mario Balotelli celebrated breaking the deadlock for Marseille against Saint Etienne by grabbing his smartphone from a nearby cameraman to brilliantly take a selfie with team-mates.

His strike in the 12th minute on Sunday was his fourth league goal in six appearances for Marseille since making his move from Nice in the January transfer window.

And what a strike it was. ‘Super Mario’ met Florian Thauvin’s in-swinging corner with an acrobatic volley to send the Stade Velodrome into frenzy.

But then, in typical Balotelli fashion, he had a celebration to match. There have been some memorable celebrations down the years and he added another one to his scrapbook. 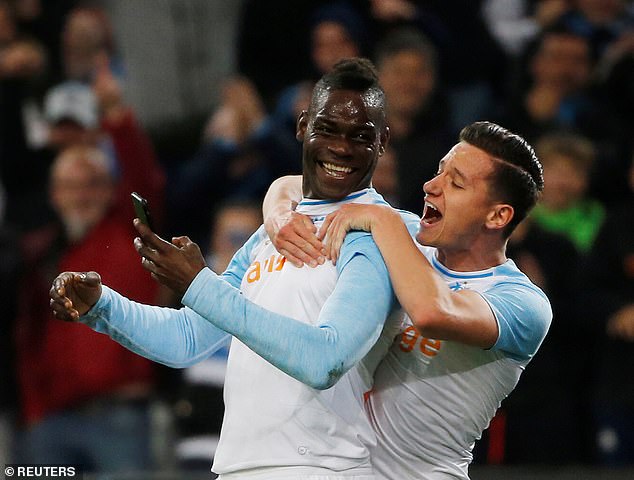 After scoring the volley, Balotelli ran over to a nearby cameraman to grab his smartphone in a pre-planned move.

Once he unlocked his phone and opened up Instagram, the striker signaled his Marseille team-mates over for a video selfie to celebrate his goal.

Balotelli then brilliantly filmed his ecstatic colleagues jumping up and down around him while he had a huge smile plastered across his face.

Once he got the footage he wanted, the former Manchester City and Liverpool striker uploaded the video to his Instagram page for his 8.3million fans to watch instantly.

However, Balotelli isn’t the first to record himself with a phone celebrating

Roma legend Francesco Totti celebrated an equaliser against Lazio in 2015 by grabbing his phone to capture the moment up close.

The result on Sunday meant Marseille leapfrogged Saint Etienne to move into fourth after they added another goal to make it 2-0 in the south of France.

They doubled the lead from the penalty spot on the nine minutes after Balotelli’s opener when Mathieu Debuchy handled the ball in the box.

It was left up to Thauvin to send the keeper the wrong way and seal all three points for Marseille.