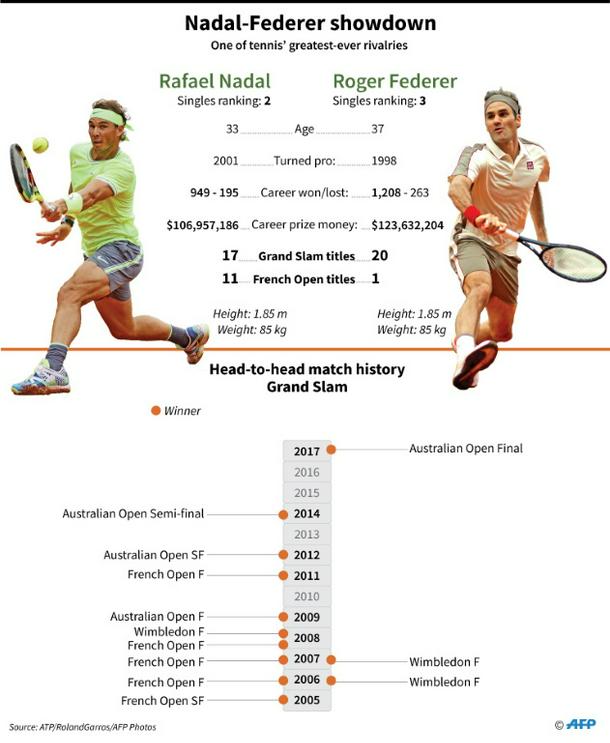 Rafael Nadal rekindles tennis’ greatest rivalry when he faces Roger Federer in the Roland Garros semi-finals on Friday, admitting his status as overwhelming favourite ignores the “trouble” he could face from the rejuvenated Swiss.

Defending champion Nadal is chasing a 12th title on the crushed red brick of Paris where he has lost just twice in 93 matches.

Five of those wins have come against Federer, including four finals.

Federer, the champion in 2009, is playing the French Open for the first time in four years.

Furthermore, the 37-year-old has only beaten Nadal twice on clay, with his most recent win coming 10 years ago at altitude in Madrid.

“That’s my feeling because he’s playing well and he has the tennis to make that happen. I have to be solid.

“I have to hit the ball strong enough to not allow him to do things from good positions.

“If I am able to play good tennis and play well with my forehand and backhand, I hope to put him in trouble. If not, I will be in trouble.”

The second seeded Spaniard leads their head-to-head 23-15 with a 13-2 stranglehold on clay.

Nadal has been in impressive form as he chases an 18th major.

He has dropped just one set so far in making his 12th Roland Garros semi-final and 31st at the majors.

Nadal has never lost in the semi-finals in Paris.

Two-time French Open champion Jim Courier says Nadal is the “huge” favourite but there is hope for Federer who is chasing a 21st major.

“He needs to stop Nadal’s forehand with his backhand but he has never been able to do that before on this surface,” said Courier who believes that Federer winning their last five matches could help.

“Nadal is a huge favourite but Roger has found a solution.

“He will be curious to see if that solution can translate from hard court.”

Nadal’s two losses in Paris came against Robin Soderling in the fourth round in 2009 and Novak Djokovic in the 2015 quarter-finals.

Federer is not giving up hope that he can be the third.

“Like against any player, there is always a chance. Otherwise nobody will be in the stadium to watch because everybody already knows the result in advance,” said Federer.

“That’s exactly what everybody believes by facing Rafa. They know it’s going to be tough. But you just never know. He might have a problem. He might be sick. You never know.

read also; Federer insists he has a chance of beating Nadal

“You might be playing great or for some reason he’s struggling. Maybe there’s incredible wind, 10 rain delays. You just don’t know. That’s why you need to put yourself in that position.”

Ten years ago Soderling hit winner after winner as the unheralded Swede ended Nadal’s 31-match win streak at the tournament.