Bayern Munich’s Manuel Neuer can make history on Tuesday by clocking up a record 96th appearance in goal for Germany in a Nations League game against Spain.

Neuer equalled Sepp Maier’s record of 95 appearances for a Germany goalkeeper, set in 1979, in Saturday’s 3-1 win over Ukraine in Leipzig.

One of the best goalkeeping performances I've ever seen. Manuel Neuer during his Schalke days against Porto. Freak.

He can claim the record outright when Germany play Spain on Tuesday to decide their Nations League group.

“It’s about time. It’s 41 years since I set the record and I congratulate him,” Maier, 76, told DPA last week.

At the age of 34, Neuer has given no hint of retirement.

Maier is tipping him to rack up a century of appearances for Germany with seven months to go before their opening match of the postponed Euro championships against world champions France in Munich.

Maier asked why Neuer should hang up his gloves: “There is nothing wrong with him.”

The Bayern stopper proved he remains at his best by hoisting the Champions League trophy for the second time last August in Lisbon, having also won the 2013 final in London with the Bavarian giants.

Neuer made his international debut in 2009, became Germany’s first-choice ‘keeper the following year and has kept 41 clean sheets in his 95 appearances.

Over the last decade, he has reinterpreted the position like Russia’s Lev Yashin did in the 1960s or France’s 1998 World Cup winner Fabien Barthez achieved in his era – Maier is as known for his dominant presence in goal as much as his ability to leave the penalty area and act as an extra defender.

Such confidence is backed by a skillset which promoted Pep Guardiola when he was Bayern coach to consider using him as an outfield player.

“I remember when Pep Guardiola seriously considered the idea of putting him in midfield for a match. I could only dissuade Pep with great difficulty,” Bayern chairman Karl-Heinz Rummenigge revealed in February.

In his youth, Neuer once sprinted out of his box to score with a spectacular bicycle kick in a junior match for his then club Schalke.

“As an outfield player, he could easily have played in the third division,” insists Germany’s goalkeeping coach Andreas Koepke.

“He anticipates well, his reflexes are remarkable and he has this unbelievably assured aura.

“All together, you can say he has raised the role of goalkeeper to a higher level.”

Neuer has lifted every trophy available to him.

He shut out the normally lethal partnership of Lionel Messi and Gonzalo Higuain as Germany beat Argentina to win the 2014 World Cup final in Brazil.

It was a crowning moment for Neuer, who was voted the world’s best goalkeeper four straight times between 2013-2016.

This year, he was voted Europe’s best keeper for the fifth time. 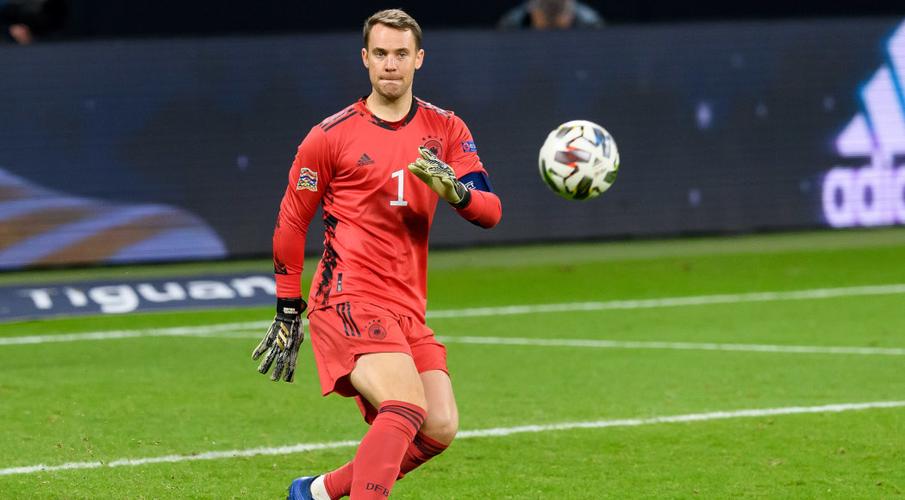 He has captained Germany since 2016 and even with Barcelona star Marc-Andre ter Stegen in good form, Neuer has made the national No 1 shirt his own.

And it was telling that when head coach Joachim Loew decided last year to retire most of his 2014 World Cup-winning veterans, only Toni Kroos and Neuer were retained.

Argentina’s most capped player retires at 36

Tottenham supporters overwhelmed by Conte’s magic after victory over Norwich