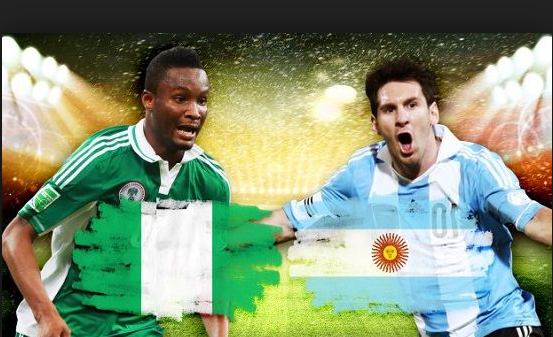 It’s squeaky bum time at the ongoing 2018 FIFA World Cup in Russia with the final group matches starting today but most of the focus for Nigerian fans will be on Tuesday’s game when the Super Eagles battle Argentina for a spot in the last 16.

Nigeria is the youngest side in the competition and the first African team to qualify for the Mundial and will hope a victory against La Albiceleste see them become the first team from the continent to reach the next round.

Egypt, Morocco and Tunisia failed to win any of their first two matches leaving Nigeria and Senegal as the only African teams with a realistic chance of making it to the next round.

The Terenga Lions are currently joint top in Group H with four points following a shock 2-1 victory over Poland in their first match before drawing 2-2 against Asian football powerhouse Japan while Nigeria recovered from a 2-0 defeat to Croatia to beat Iceland 2-0.

Gernot Rohr’s men have three points after two matches and sit second in Group D and a victory over the Lionel Messi inspired Argentina will guarantee them qualification.

However, a draw could be enough for the Super Eagles if Iceland lose or draw against the in-form Croatia.

Nigeria has never won against Argentina at the FIFA World Cup in four previous meetings but will draw confidence from their recent 4-2 victory against La Albiceleste in November, 2017 during a friendly. 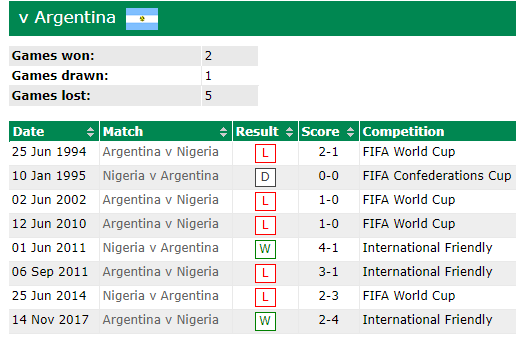 Mikel and Messi haven’t exactly light up the 2018 FIFA World Cup like they both did in 2005 duing the 2015 FIFA U-20 World Cup. The Nigerian was named the second best player at that tournament behind the Argentina who has gone on to win five Ballon D’Or titles.

On Tuesday, Mikel will be tasked with cutting out supplies to Messi and protect the back three like he did against Iceland and it will be an interesting battle between the two.

The 3-5-2 formation allows Musa the opportunity to play through the middle and his pace will be too much to handle for Otamendi. The Manchester City defender looks a big suspect whenever fast forwards take him on and commits a lot of fouls against them.

And when this happens the Super Eagles must be ready to pounce just like they did during the friendly last November when Iheanacho scored from a freekick.

Ekong committed an atrocious foul in the first game against Croatia which he wrestled Juventus forward Mario Mandzukic to the ground inside the 18-yard box. That schoolboy error cost the Eagles the game as Luka Modric scored from the penalty.

He improved in the win against Iceland but will face a bigger test against another Juventus forward. Higuain can be a tricky customer and will look to push the Nigerian backline as close to the goal as possible and force a mistake.

This will be the most interesting battle in midfield because Etebo has the legs to get away from Mascherano everytime but the experience of the Argentine will come into play.

The new Stoke signing is full of energy and running but will need to improve on his passing especially in the final third to have more impact on the game while Mascherano will try to control the tempo of the game from midfield.

After the hammering by Croatia, the Argentine players held a close door meeting with manager Jorge Sampaoli to find solution ahead of their ‘must win’ game against Nigeria and Messi will hope for a perfect birthday gift after he clocked 31 on Sunday.

However, it will not be easy against the Nigerian side looking forward to become the first African side to reach the semifinals of the World Cup and this will make for a pulsating encounter.