Nigeria vs. Seychelles: Why I invited Ighalo – Rohr 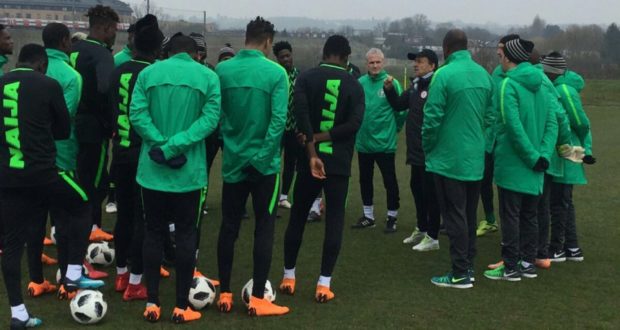 Despite criticism in some quarters over the inclusion of Odion Ighlo in the 28 players invited to prosecute the country’s September 7 Africa Cup of Nations’ qualifier against Seychelles in Victoria, Head Coach Gernot Rohr, has appeared unperturbed.

The German tactician has rather stuck  to his decision as the national team gets set to open its camp in Abuja before jetting out for  the September 7, away clash.

He noted that though Ighalo who last scored for the Eagles a year ago against Cameroon in Uyo, missed begging chances against Argentina in Russia which failed to impress some of the fans, he nonetheless deserves another opportunity to make amends.

He insisted that Ighalo still has a role to play in his formation to secure the maximum 3 point in the crucial duel adding that “this is an opportunity for him(Ighalo) prove his critics wrong.”

Rohr continued, “He has been scoring in China and he is very motivated to do so for the Super Eagles now.”

On Sunday, the 29-year-old striker scored his 16th goal in the Chinese Super League. The Nigerian international emerged the hero of Changchun Yatai after he scored the equaliser to make sure they didn’t lose at home to Hebei CFFC in a game which ended 2-2.

The former Watford striker who scored 15 goals for Changchun Yatai last season put smile on the faces of Changchun Yatai fans as he scored in the 89th minute to level the goal margin.

A breakdown of the 28-man squad released on Friday showed that 24 players were listed as regulars, while four players were listed as stand-by, comprising Uche Agbo who plays for Standard Liege, Belgium, Eze Stephen who stars with Lokomotiv Plovdiv, Bulgaria, Musa Mohammed starring for Hnk Gorica, Croatia and Blessing Eleke.

Team Administrator Dayo Enebi Achor revealed on Friday that the invited players are expected to fly directly to Seychelles, arriving on Monday, 3rd September, while the one player (goalkeeper Ikechukwu Ezenwa) and team officials traveling from Nigeria will fly into Victoria on Sunday, 2nd September.

Bolt admits to nerves ahead of Mariners debut