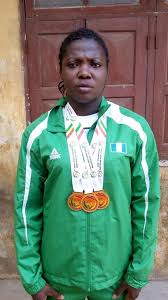 According to IWF, the sample of Ms Bilikis OTUNLA (NGR) has returned an Adverse Analytical Finding for metenolone and metenolone metabolite -1-methylene-5α-androstane-3α-ol-17-one (S1.1 Anabolic agents). As a consequence, the Athlete is provisionally suspended in view of a potential anti-doping rule violation.
The world body added: “In any case, where it is determined that the Athlete did not commit an anti-doping rule violation, the relevant decision will also be published. IWF will not make any further comments on the case until it is closed.”

The 24-year-old claimed her second continental title at the 2019 African Championship may face an eight-year ban from the sport after testing positive for anabolic steroids for the second time.

Otunla, who was continental champion at 75kg in 2018 and 81kg in Cairo this year, was banned for two years from 2012 to 2014 after testing positive for nandrolone, and her violation is the first to be announced by the IWF since it signed the second part of an agreement with the International Testing Agency (ITA), which is taking over anti-doping procedures including in-and-out-of-competition testing, results management and athlete biological passport programme.

Considered to be in good position to qualify for next year’s Olympics in Tokyo as Africa’s top-rated athlete outside the top eight automatic qualifiers and she is the seventh Nigerian tested positive since 2010, with all of them women.