Nigerian-born and Manchester City striker, Lukas Nmecha was a second-half substitute in Germany’s 2-1 win over England in an Under-21 friendly in Bournemouth on Tuesday, having decided to switch allegiances earlier this year leaving Nigeria and England in limbo.

Two years ago, Lukas Nmecha fired England to glory at the Under-19 European Championships in Georgia. On Tuesday, however, the Manchester City youngster made his debut for Germany. 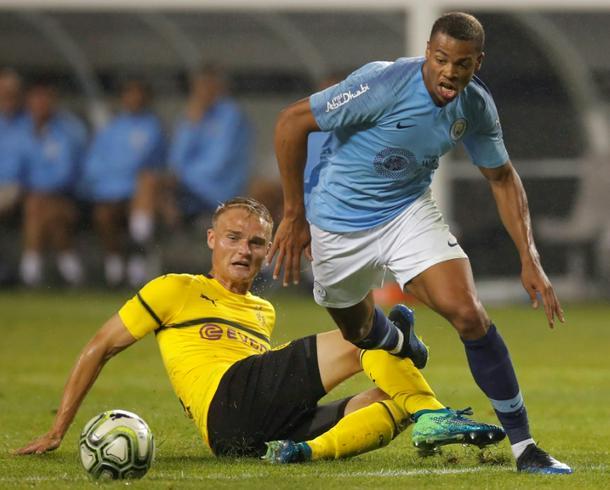 The 20-year-old forward was only declared eligible to play for Germany’s Under-21 side shortly before kick-off, and came off the bench to make his Germany debut against former England teammates.

“I see Germany as my home. I lived in Hamburg until I was nine years old and I still have a close bond to the city and the people there,” Nmecha told AFP subsidiary SID.

“I only found out that I could play ten minutes before kick-off. It was pure joy.

My father persuaded me to play for Nigeria but the Germany team were so keen on me and its where I spent my nine years on earth, and Hamburg is a beautiful city to behold.”

Nmecha, the son of a German mother and a Nigerian father, was scouted by Man City at the age of nine, and has been at the club ever since. He made his Premier League debut against West Ham United in April last year, and has spent this season on loan at second-tier side Preston North End.

The young forward’s attitude and performances have earned him praise from City coach Pep Guardiola.
“Lukas has potential. He is hungry, and he always listens and keeps his eyes open,” said Guardiola last year.
Nmecha represented England at every junior level from Under-16 before he was persuaded to switch by Germany Under-21 coach Stefan Kuntz earlier this year.

“The coach visited me at my home in Manchester and told me about Germany’s team spirit,” said Nmecha.
“He really convinced me, and he also spoke to my mum, who is from Moenchengladbach.”
Nmecha, whose brother Felix also plays for City and has represented both England and Germany at youth level, revealed that he speaks German with his mother so as not to forget his native language.

He will have more chances to keep up his German from now on. Despite continuing interest from England and Nigeria, the City talent says his decision to play for Germany is final.

“I have chosen Germany, where I was born. I thought for a long time about what I wanted. It was the right decision,” he said.

Germany Under-21 coach Kuntz, meanwhile, is looking forward to working with his new player, and said that he may have a few more surprise selections up his sleeve.

“We try to be creative with our selection, and we have one or two ideas which nobody will be expecting,” said Kuntz.