It was tearful moment for Spain International and Barcelona midfielder Andres Iniesta on Friday as he announced he was leaving the club after 22 years.  He however underlined that he will not be moving to any other club in Europe. 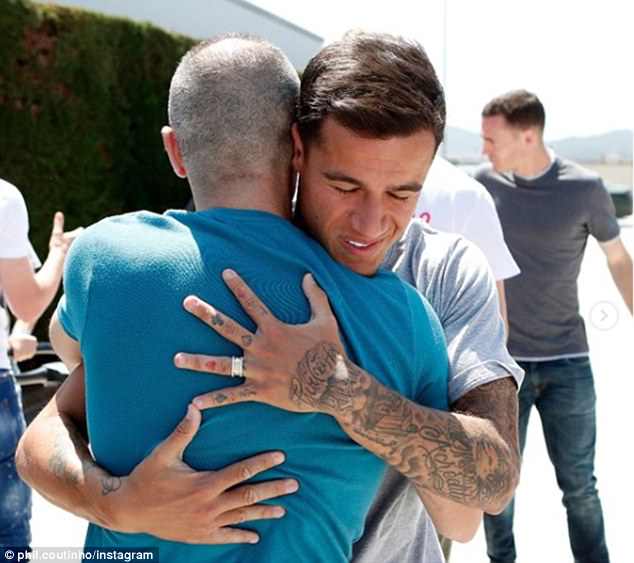 ‘We arrived 25 years ago in our family car,’ he said of his trip to Barcelona’s La Masia youth academy with his parents and grandparents for a trial at the club.

‘Now they are here with me as I say goodbye. That journey was emotional but it was also terrible because then I ended up here on my own and I was only 12 years old! But evidently it was worth it.’

There were tears as he thanked his team-mates who packed the press room to watch him say goodbye. Only Lionel Messi and Luis Suarez of the first team regulars were absent. It was when he mentioned his team-mates that the tears first began to well up in his eyes.

There was no confirmation of his move to China at the end of the season but he did confirm that he would not be opting for a Premier League swansong despite interest from Manchester City and his former manager Pep Guardiola.

He said: ‘All the options that are not in Europe are possible. But in Europe, no, because I have always said that I will not play against Barcelona.’

Iniesta was asked about France Football’s recent admission that they probably owed him a Ballon d’Or. He made it clear the ball on the pitch was all that mattered to him.

He said: ‘There was no apology necessary. Everyone likes personal prizes but it was never that important for me.

‘I learned, when I first arrived here, that there is a ball and it is very important to take care of it.’

Asked about Barcelona’s future without him, he said he believed they could continue winning. And joked that he would return in three years to play again.

Iniesta’s press conference was watched by his team-mates on Friday, but Lionel Messi and Luis Suarez were both missing.

The Argentine has a history of avoiding emotional public goodbyes, having famously skipped Pep Guardiola’s back in April, 2012.