Angelo Ogbonna says West Ham United need to get their minds back on the job as they prepare to host Premier League leaders Liverpool. 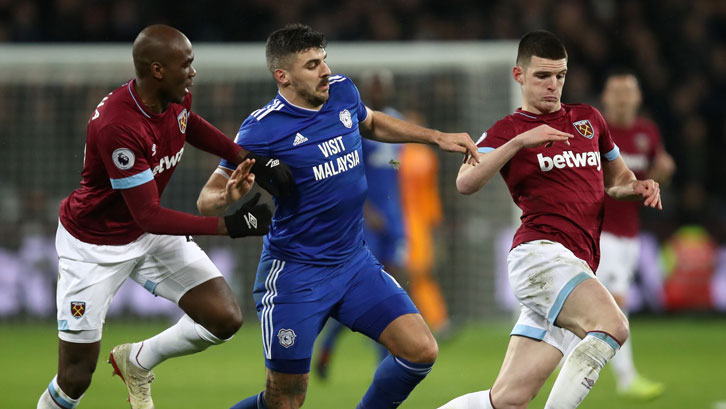 The Hammers go into Monday night’s match on a run of three straight defeats in all competitions, the last of which was a 3-0 top-flight reverse at Wolverhampton Wanderers.

Ogbonna admitted things have not gone well since the Irons beat Arsenal in their last London Stadium fixture three weeks ago, but says the squad is committed to giving everything in a bid to put things right.

“I think we have to do things step by step and we are now totally focused on this Premier League game with Liverpool,” the No21 confirmed. “In this moment of the season, we have to concentrate 100 per cent on our jobs, as it is a really, really important game.

“We still want to achieve things this season in the Premier League so, if we want to do them, we need to do better, starting against Liverpool on Monday.”

The position Dec plays is very important for the defence, it makes your job easier

Alongside centre-back Ogbonna, another player whose defensive talents will undoubtedly be vital to West Ham’s hopes of slowing Jurgen Klopp’s Reds will be Declan Rice.

The deep-lying midfielder has been one of the Hammers’ standout performers this season, recovering from a difficult opening-day experience in the 4-0 defeat at Anfield to earn praise from his manager Manuel Pellegrini, as well as a new long-term contract.

The Italian is another big fan of the 20-year-old’s work.

“Everybody knows that Dec has a lot of quality for his age and that he’s a good player and he’s a good lad,” Ogbonna observed. “When I see young players train hard and not complain because they want to reach the top level, it’s very, very good.

“The position Dec plays is very important for the defence, it makes your job easier. He has to read the game totally and keep the ball and try to give the defence an opportunity to play from the back.