By Akeem Lawal On Feb 12, 2019 0
Goals from Dayo Ojo and Fuad Ekelojuoti ensured Sunshine Stars FC of Akure continued their impressive run in the 2018/19 Nigeria Professional Football League season with a 2-0 win over Katsina United in a match day 8 game at the Ondo State Sports Complex on Monday. 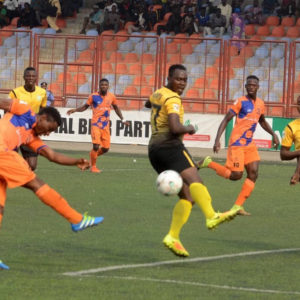 After a goalless first half, which saw two of the visitors sent off, midfield maestro Dayo Ojo broke the deadlock midway through the second half before new season sensation, Fuad Ekelojuoti added the second in added time.
Twenty six minutes into the game, the visitors were reduced to ten men, following the sending off of Joshua Agboola for consecutive bookable offences.
Five minutes later, Tsawanya Samuel also got the marching orders for an off field assault on Abe Sunday.
Katsina United however held their nerves for the remainder of the first half, running into the break with the scoreline barren.
On the resumption of the second half, coach Kabiru Dogo rang two changes on his team, bringing on Franklin Sasere for Daniel Barnabas while fourteen year old sensation, Ayo Adejubu came on for Chibundu Amah for his NPFL debut.
Six minutes after the hour mark, Dayo Ojo broke the deadlock with a powerful strike from inside the area, sending the arena into romp by finishing off a tee up by Sasere from an initial attack he was involved in.
The breakthrough sparked more urgency and Abe Sunday almost doubled the advantage, no thanks he woodwork which denied the captain.
Dayo Ojo was again teed up by Franklin Sasere inside the area but his instep shot missed the target by centimetres.
Sunshine Stars also finished the game with 10 men after Seun Olulayo was given the marching orders in the closing stages of the game for an onslaught on an opponent.
In stoppage time, the man in the heart of Akure fans, Fuad Ekelojuoti took the game beyond the visitors with a tap home for Sunshine Stars’ second of the game and his forth of the season.
With two games at hand, the Akure based side now have 11 points from six matches, second behind MFM FC who lead with 15 points from seven matches.
Sunshine Stars will again file out on Thursday against newly promoted side, Bendel Insurance of Benin.

Joshua up for most lucrative bout in the wilderness