Okagbare others in contention as Jamaicans seek photo finish

Nigeria’s Blessing Okagbare easily one of the nation’s medal hopeful will be among contenders in the 100m event. Ranked fifth going into the Olympics with her 10.89 just behind Ivorian sprinter Marie-Josee Ta Lou

with 10.86 and having Dina Asher-Smith 10.91 behind her it is apparent that the 100m showdown will be tug of war. Will these contenders shake the table or will the Jamaican ladies thinking of another photo finish have their way in Tokyo?

Thirteen years ago, Jamaica’s women created history at the Beijing Games in China as the trio of Shelly-Ann Fraser-Pryce, Sherone Simpson and Kerron Stewart finished 1-2-2 in the final of the 100 metres for gold, silver and silver.

In approximately two weeks, on Saturday, July 31 at 7:50 a.m. Jamaican time, it will be time for the final of the women’s Blue Riband event at the Tokyo Olympics and Jamaicans all over will be hoping for another sweep of the medals, and based on form going into Tokyo, this is a possibility with Fraser-Pryce again expected to lead this cast.

The country’s female sprinters are in immaculate form going into the Games. Fraser-Pryce has already clocked a personal best and world lead of 10.63 in the event.

Two other Jamaicans closed out the top three going to Tokyo as Elaine Thompson Herah, the defending Olympic champion, and Shericka Jackson, with 10.71 and 10.77 are at two and three, respectively. American Sha’Carri Richardson, who is third on the World Athletics top list, is presently serving a one-month ban following a positive test for marijuana and will not be in Tokyo. 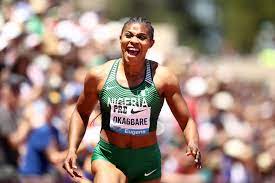 While Richardson will be absent, this does not guarantee a sweep of the medals for the Jamaica trio as two other athletes stand in their way here – Great Britain’s Dina Asher-Smith and Marie-Josee Ta Lou – are serious threats and are medal contenders and could crash the Jamaican party.

Ta Lou is the fourth-ranked athlete going into the Games with a season’s best 10.86, while Asher-Smith is at sixth with 10.91, just behind fifth-ranked Blessing Okagbare of Nigeria with 10.89.

The crowd may not be there due to Covid-19 that appears to have removed all the glamour of the sports at least for now but the tracks will certainly burn to the delight of its lovers and followers. It is only a matter of days and hours.