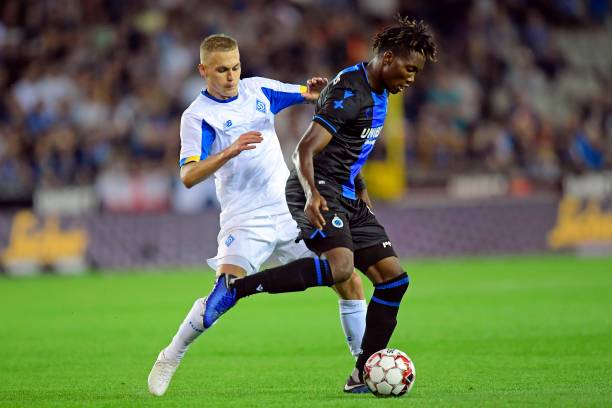 Club Brugge new acquisition, David Okereke has warned his teammates against over-celebration after they pipped Dynamo Kyiv 1-0 in the first leg of their Uefa Champions League third round tie at home.
Okereke joined the Belgian league side recently from Italian Serie B side, Spezia and he has had an electrifying start to life in Brugge where he has netted three goals from only two league games.
The Under 23 international told SportingLife that they were happy with the first leg win but they know that they still have a leg more to play in Kyiv which they must at least avoid a defeat for them to get to the final round of the qualifiers before the group stage proper.
“We have only played the first leg and we still have another one to play next week so we do not have much reason to celebrate yet,” Okereke told SportingLife.
“We must play better than we did at home and ensure that we avoid a defeat that will eliminate us from the competition. It will be a dream to play at the group stage of the Champions League. We must remain grounded and ensure that we do not over react after this slim win.
“It was a fantastic atmosphere and our fans really cheered us on from the start to finish. We must go to Kiev with the same quest to make them happy.” 27,000 fans were on hand to applaud Club Brugge’s 1-0 win at the Jan Breydel Stadion.
Club Brugge who are on top of the Belgian Jupiler on goals difference with six points from two games will visit fifth placed Oostende on Saturday in one of Matchday three fixtures and Okereke and his compatriot, Emmanuel Bonaventure Dennis must be ready for the task at hand.
read also: Crystal Palace eyes Spezia&#8217;s David Okereke
Loading...
Latest sport newssportinglife.ng