The Canada based student ran 100m in 12.7sec as revealed by her father Okey Bakassi on his instagram on Friday.

The Comedian confessed that his daughter’s qualification came to him as a surprise as he had doubted her ability to post such a feat considering that she was running against older students.

The proud father may have struck a bet with the daughter before the race, and revealed afterwards, that he now owes his daughter $1,000 having done what he had considered impossible.

The Ontario Federation of School Athletic Associations is an organization of student-athletes, teacher-coaches, student-coaches, teachers, principals, and sport administrators in Ontario, Canada.

But the post on Instagram did not only tickle the fancy of a number of his followers but in fact wowed many  who were surprised that he has a daughter that is not only matured but is focused determined and forging ahead in her own area. 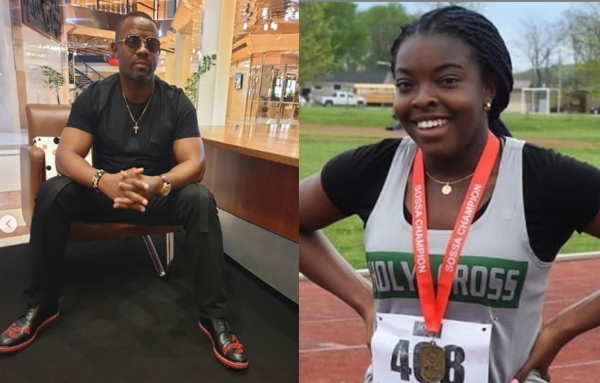 Chidera’s feat may as well be just a piece of the iceberg judging from extract from her mission statement.

Okey Bakassi who served as Senior Assistant to former Imo State Governor Ikedi Ohakim many say has indeed paid his dues in the entertainment industry where he has been active for over 16 years.  The graduate of River State University was in 2014 voted the “Best Actor in a Leading Role (Igbo)” category at the 2014 edition of the Best of Nollywood Awards for his role in the film Onye Ozi.

Joshua confesses: I was up till 3am thinking of Ruiz