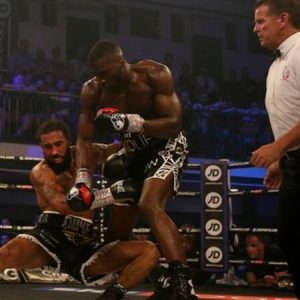 The 26 year-old hopes to continue his impressive march in the professional ranks and will be defending his belt on the Sergio Garcia/Ted Cheeseman under-card.
Okolie has won the British and Commonwealth cruiser-weight titles and will be defending his WBA title for the first time against 36-year-old American Miller who has lost four times and drawn once in 24 fights.
Okolie is undefeated in 10 fights with 7 ending via knock outs.
Okolie is an alumnus of Repton Boxing Club. The London based club has over the years partnered with the Lagos Boxing Hall of Fame chaired by Olawale Edun, engaging boxers from Lagos in England and Nigeria.
He took up boxing at Repton when he was 17 after being bullied for being overweight and represented England at the Rio Olympics in 2018.