Athletics Federation of Nigeria (AFN) Performance Director,Gabriel Okon is thrilled with the performances of athletes at the AFN All-Comers competition held in Akure at the weekend and he said the future’ is bright’ for track and field in Nigeria. 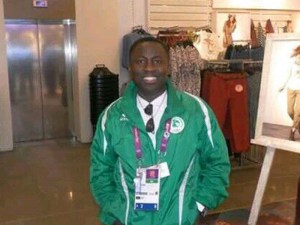 A sizeable number of athletes ran new personal bests on the track in their first competitive race of the year and Okon believes it is a positive sign of what to come if the athletes are given the motivation and training that they need.

‘The performances at the AFN All-Comers event blew my mind. Imagine having athletes running fast times in a season opener.This is great encouragement for us at the Athletics Federation of Nigeria to provide more competitions for them so that they can perform to their optimal best,’said Okon who has coached Team Nigeria track and field athletes to several Olympics and World Athletics Championships.

Ifeanyi Ojeli of Making of Champions track club ran a first ever sub 21 seconds of his young career,racing past the finish line in 20.94 seconds. The performance shot him to the top of World Athletics list of performances released on Tuesday. Ojeli obviously continued where he stopped last year when he ran 45.91 seconds in the 400m,his first quarter mile race inside 46 seconds when just about a year earlier,he was struggling with a 46.9 seconds.

Another athlete who ran a new personal best is Favour Ofili,the University of Port Harcourt undergraduate student who improved her time in the 200m from 23.24 seconds achieved in 2019 to 23.07 seconds in only her first race in 2020. Ofili is now the fastest 200m athlete in the world so far this year and looks on course to becoming the eighth Nigerian woman to run a sub-51 seconds over the 400m in the all-time list. Currently ranked 16th in the Nigerian 400m all-time list,Ofili ran a new 51.51 seconds personal best at the World Athletics Championships in Doha,Qatar to top the Nigerian list last year.

‘With Ofili and a couple of our athletes who opened their campaign this season with 54 seconds runs,I believe we can get them to improve to a sub 52,51 seconds before the African Championships in Algeria in June and get the qualifying time to qualify for the Olympics in the 4x400m. I am really excited,’Okon added.

In the women’s 100m,Nzubechi Grace Nwokocha ran an 11.52 seconds lifetime best to race to the top of the world list. Her 11.37 seconds performance in the final was aided by a massive 7.6mps trail wind while Glory Patrick won the 400m in a new 54.50 personal best, beating her previous best of 54.88 seconds which she ran in 2017. ‘Esther Okon, a junior athlete from Akwa Ibom ran 53.77 seconds,a personal best which qualifies her for the World U-20 Championship holding in Kenya in July.

Read Also:AFN: All is set for All-Comers competition in Akure

We are confident more personal and world-leading performances will be achieved in Ado Ekiti at the end of the month when the first AFN Classics holds at the Oluyemi Kayode stadium,’ said Okon who challenged Ojeli to race to a new lifetime best to honour the late Oluyemi Kayode, a member of the silver medal-winning 4x100m quartet to the 1992 Olympic Games in Barcelona,Spain who died in October,1994 in Arizona,United States of America.

The Ado Ekiti was named in the memory of the 200m specialist who finished seventh in the event at the 1992 Olympics.