Orebro SK Nigerian midfielder Omoh Michael is ecstatically looking ahead of the Swedish league season, which begins on March 31.

Omoh recently returned from pre-season training in Dubai with his Swedish club to beat GAIS 2-1 in the Svenska Cupen on Saturday. 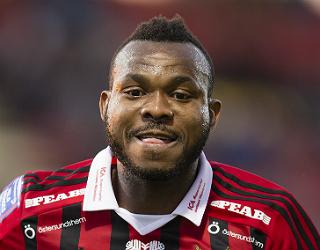 The creative Nigerian midfielder was an unused substitute during the Cup tie at the Behrn Arena, but is hopeful of a fine season ahead.

“I’m fresh from pre-season in Dubai and can’t wait for the season to begin,” he said. “We played two games; I came on as a substitute against FC Copenhagen, which ended 0-0, and started our other game against an Azerbaijani club. The training helped us in bonding before the Cup games started.”

On his expectations for next season, Omoh, who spots the number 29 jersey, added, “I like enjoying my football and I try to improve my game every time. My goal as always is to work hard for the team and play good football.”

The 27-year-old arrived in the Scandinavian country in 2011 to lace his boots for Dalkurd FF, scoring 28 goals in 90 games in three seasons. He moved to Östersunds FK in 2015 and spent one season before a high-profile move to Orebro in 2016.