Henry Onyekuru entered the record books for Turkish champions Galatasaray as he struck thrice in their 6-0 home defeat of Ankaragucu in the Super Lig on Saturday. 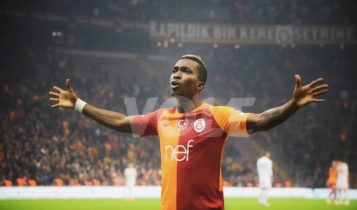 The Nigeria international who is on loan secured the club’s biggest league victory in 32 years.

He struck in the 20th, 59th and 63rd minutes to cap a memorable night and also increase his goals to nine this season in 16 appearances.

Onyekuru was not the only Nigerian on parade on the night as former Nigeria U20 winger Nduka Ozokwo was a second-half sub for Ankaragucu.

Meanwhile Onyekuru is delighted scoring his first hat-trick of his career which he attributed to team performance.

“The moves you make when you get your first hatrick! A great start to the year and team performance! All Glory to God!,” he said on twitter.

Read Also: Onyekuru to Galatasaray: Give me more money

Galatasaray are now second on the table with 32 points from 18 matches, three points behind leaders, Istanbul Basaksehir.