Super Falcons forward, Asisat Oshoala netted a late consolation for Barcelona Ladies in Hungary’s capital Budapest as they fell 4-1 to Olympique Lyon in the final of the UEFA Women’s Champions League. 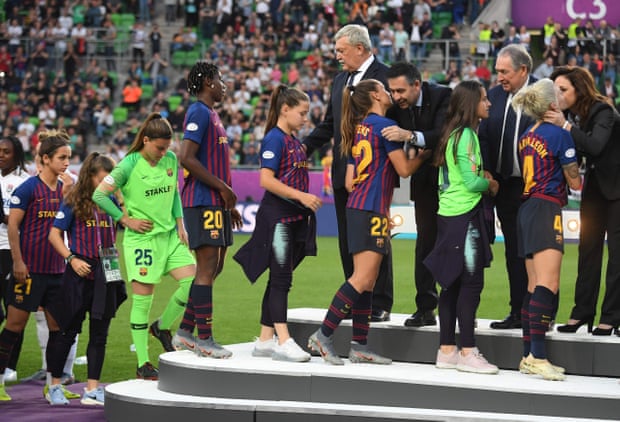 Oshoala who came on in the 69th minute for England international, Toni Duggan scored in the 89th minute after she was set up by Dutch international Lieke Martens.

It was her eighth goal in 10 appearances for the Spanish outfit having joined them on a six-month loan in January from Chinese club Dalian Quanjian .

Hegerberg who would be missing when Norway confronts Nigeria’s Super Falcons at next month’s FIFA Women’s World Cup in France made history by becoming the first player to net a hat-trick in a Women’s Champions League final since the competition’s rebranding in 2010.

Another history maker is Oshoala who is the first Nigeria female player to feature in the women’s final.

Lyon who are the best funded side in the women’s game in Europe secured their fourth Champions League title in a row and their third trophy this season after claiming the French Championship and the Coupe de France.

They did not lose a single match this season in the league.