Super Falcons forward and African Woman footballer of the year Assisat Oshoala will be hoping to hit target Sunday as Barcelona face Athletico Madrid away  in the Primera División Femenina in what has been dubbed Super Sunday clash.

No fewer than 68,000 spectators are expected at the showdown billed for the 68,000-capacity Wanda Metropolitano Stadium.

Atletico revealed no more tickets are available as tickets for the match sold out just few hours after sales opened. The tickets that sold for £4.20 each (approximately N2,000) were quickly cleared with fans looking forward to the epic clash in which Oshoala who so far has been a hit for the Barcelona side will be hoping to increase her goal tally for the side she joined shortly after helping Falcons clinch their 9th African Nations cup in Ghana.

The crowd is tipped to be the largest ever for a club-level women’s match in Europe, beating the 48,121 record that Athletic Bilbao said it set in January in a Copa del Rey match against Atletico Madrid at San Mames Stadium in Bilbao 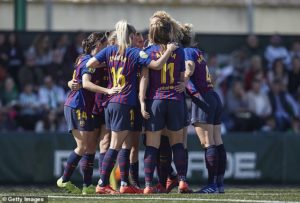 Last season, more than 22,000 watched Atletico’s women’s squad play its first game at the Wanda. It usually hosts its matches at a smaller venue in Madrid.

The two-time defending champions, Atletico Madrid have a six-point lead over Barcelona with seven matches left.

The women’s club game with the highest attendance in Europe reportedly was played in 1920, when 53,000 people watched Dick, Kerr Ladies play St. Helen’s Ladies at Everton’s Goodison Park stadium, according to the English Football Association. 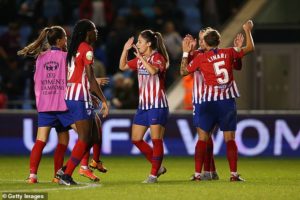 The record for any women’s match was the 90,185 people who watched the 1999 World Cup final between the United States and China at the Rose Bowl. At the 2012 Olympic final in London, 80,203 people saw the United States defeat Japan 2-1 to win the gold medal.

The Barcelona ladies will not only be hoping to rise to the occasion playing away notwithstanding, they will also be hoping take revenge after a 2-0 defeat by Athletico in the Copa dela Reina on February 17.